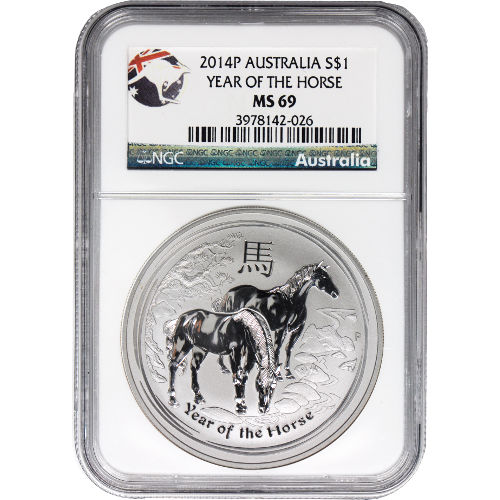 In 2014, the Perth Mint continued its celebration of the animals in the Chinese Zodiac with the release of the 2014 1 oz Silver Australian Horse Coin. The Lunar Coin series was originally launched in 2002, and was reintroduced due to the popularity of the first series. Today, you can purchase a 2014 1 oz Silver Australian Horse coin from Silver.com with an MS69 grade from the Numismatic Guaranty Corporation.

The Lunar Coin series from the Perth Mint highlights the animals of the Chinese Zodiac. On that lunar calendar, the horse is the seventh animal featured. Ancient Chinese history states that the animals of the Zodiac were selected by Buddha after accepting an invitation to gather. Despite inviting all creatures, only 12 showed up. Those 12 are represented on the lunar calendar. Those born under the sign of the horse are considered hardworking, sociable, optimistic, and energetic. The Year of the Horse covers those born in 1906, 1918, 1930, 1942, 1954, 1966, 1978, 1990, 2002, and 2014.

On the reverse side of the 2014 1 oz Silver Australian Horse is the image of two horses beside a rocky stream. The scene depicts a pair of horses by the stream, with one drinking from the water as the other gazes off into the distance. Engravings on the reverse include “Year of the Horse,” the Chinese symbol for horse, and a “P,” indicating the Perth Mint.

The obverse side of the coin bears the traditional right-profile portrait of England’s Queen Elizabeth II. The image of Australia’s sovereign leader was originally designed by Ian Rank-Broadley, and is encircled by engravings that read “Elizabeth II,” “Australia,” the weight, purity, metal content, and year of minting for the coin. The face value, in Australian dollars, is also included.

London’s Royal Mint established a minting system in Australia beginning in the 1840s to process and refine gold discovered on the continent. At its height, the system included facilities in Sydney, Melbourne, and Perth. Today, the Perth Mint is the only remaining facility from the Royal Mint system and is Australia’s oldest operating facility. The MS69 grade from the NGC means these coins have an attractive, sharp strike, with no more than two blemishes.

If you have questions about the 2014 1 oz Silver Australian Horse Coin (NGC MS69) or the online purchasing process, don’t hesitate to contact us at 888-989-7223. Feel free to get in touch with us online using our live web chat feature which is located on the contact page of our website.