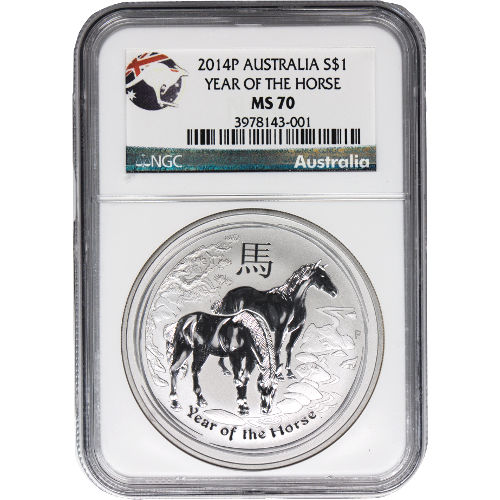 Australia’s Perth Mint continued its Lunar Coin series with the Year of the Horse 1 oz silver coins in 2014. The Lunar Coin series celebrates the animals of the Chinese Zodiac. In 2014, the Year of the Horse reigned supreme and the Perth Mint’s 2014 1 oz Silver Australian Horse Coins included the level of intricate details and stunning imagery that investors and collectors expect from the mint. Today, you can own a 2014 1 oz Silver Australian Horse coin with an MS70 grade from the Numismatic Guaranty Corporation.

In the Chinese Zodiac, the horse is the seventh animal on the calendar. Ancient Chinese legends state that Buddha invited the animals of the world to a gathering. Only 12 of the animals invited actually showed up, and Buddha honored them with placement on the Zodiac. Those born under the sign of the horse are said to be hardworking, sociable, optimistic, and energetic. The Year of the Horse covers those born in 1906, 1918, 1930, 1942, 1954, 1966, 1978, 1990, 2002, and 2014.

On the reverse side of the 2014 1 oz Silver Australian Horse Coin is the image of a pair of horses standing beside a small stream. One horse has its head up, while the other is sipping from the cool waters of the stream. Engravings include the phrase “Year of the Horse,” as well as the Chinese symbol for horse. There is also a small “P” engraved on this side of the coin, representing the mint mark.

The obverse side of the coin bears Ian Rank-Broadley’s right-profile portrait of Queen Elizabeth II. There are numerous engravings on this side, including “Australia,” “Elizabeth II,” the weight, purity, metal content, year of minting, and face value in Australian dollars of the coin.

The Perth Mint is the last facility in operation from the Royal Mint system. When Australia was a British colony, the Royal Mint operated facilities in Sydney, Melbourne, and Perth. The latter was the final mint to open, and today is the oldest operating mint facility in Australia. An MS70 grade from the NGC means this coin is considered perfectly minted, with no blemishes on the coin.

If you have questions about this, or any other Silver.com product, don’t hesitate to contact our associates at 888-989-7223. We’re also available online through our live web chat feature. Feel free to browse our website and check out our full collection of Perth Mint Silver Coins for other designs and grades.