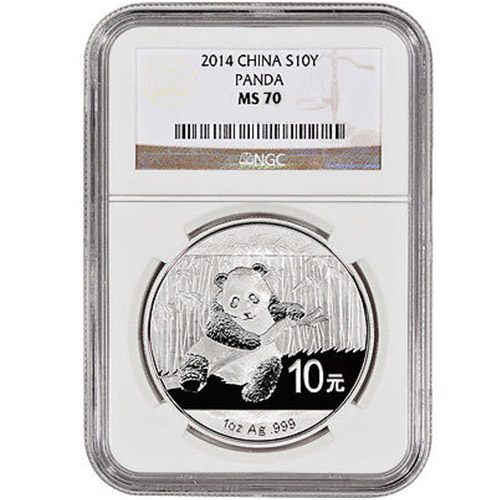 While the dragon is considered the official emblem of the People’s Republic of China, it is the panda bear that most people associate with the world’s most populous nation. China’s economy has been an unstoppable force for much of the late-19th and early-20th centuries, and today that power is noted in the popularity and growing influence of the Silver Chinese Panda Coins. Today, you can purchase a 2014 1 oz Silver Chinese Panda Coin from Silver.com with an MS70 grade from the Numismatic Guaranty Corporation. An MS70 grade from the NGC indicates these coins are perfectly minted and have no blemishes.

The panda, also known as a giant panda or panda bear, is native to southern and central portions of China. The large bears consume a diet that consists almost entirely of bamboo, but does include other sources of nutrition such as grass, wild tubers, and even the occasional small bird. The Silver Chinese Panda is the official silver bullion coin of the People’s Republic of China, and has been minted every year since 1983, with the exception of 1986. Unlike similar national silver bullion products like the Silver Canadian Maple Leaf or Silver American Eagle, the image of the panda changes from year to year.

On the reverse side of the 2014 1 oz Silver Chinese Panda Coin is the image of a lone panda. In the image, it can be seen sitting down with a bamboo shoot in its paws. Behind it is a large wall of bamboo. Engravings on this side of the coin include the weight, metal content, and purity of the coin, as well as the face value (in Yuan) and the Chinese symbol for panda.

The obverse side of the coin features a depiction of the Temple of Heaven. Engravings along the top include “People’s Republic of China,” in Chinese, and the year of minting below.

The Silver Chinese Panda Coins are minted for the People’s National Bank by various mints within China. None of the coins contain mint marks, so it is impossible to know which mints are responsible for producing each specific coin. However, the primary mints in China are located in Shenzhen, Shanghai, and Shenyang.

If you have questions about this MS70 2014 Silver Chinese Panda Coin or other products from Silver.com, don’t hesitate to contact our associates on the phone at 888-989-7223. You can also reach one of our representatives on the web using our live chat service.