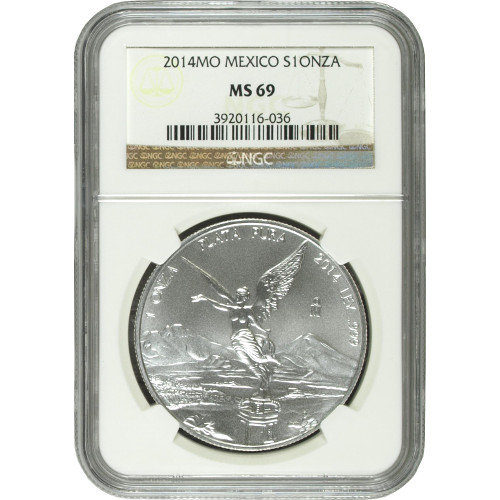 The Silver Mexican Libertad coin is the official silver bullion coin of Mexico and is produced by the Mexican Mint with the authority of Banco de Mexico. Each of the coins features iconic images from Mexico’s War of Independence with Spain, and the images have been used on previous coin program dating back to the 1920s. Today, you can purchase a 2014 1 oz Silver Mexican Libertad coin on Silver.com.

Mexican Libertad coins were introduced in 1982 as the nation’s sovereign silver coin. Each coin features design sets inspired by the gold Centenario coin, which was originally produced between the 1920s and 1950s in honor of the nation’s celebration of its independence. All coins are produced using .999 fine silver and feature the “OM” mint mark from the Mexican Mint.

Each coin available to you in this product listing comes with a Mint State 69 grade from the NGC. Coins in this grade feature their full, original luster, with no more than two minor detracting flaws, contact marks, or miniscule hairlines. None of these blemishes are visible in the coin’s primary focal areas.

On the obverse side of each Libertad is the image of Winged Victory. An inspirational image during the War of Independence, this winged angel is also featured atop a statue in the center of Mexico City, where it was erected in 1920 at the centennial celebration of the war’s beginning.

The reverse side of each coin has the Mexican coat of arms in the middle. Featuring a bald eagle locked in battle with a serpent atop a cactus, the modern coat of arms is immediately surrounded by the engravings of a wreath (bottom) and “Estados Unidos Mexicanos” (top). There are also 10 historical versions of the coat of arms on this side.

If you have any questions about these products, please call a Silver.com associate at 888-989-7223. We’re also available to chat online through our website’s dedicated service, and can be contacted via email. Be sure to visit our Silver Mexican Libertads page for our full selection of available Mexican silver coins.