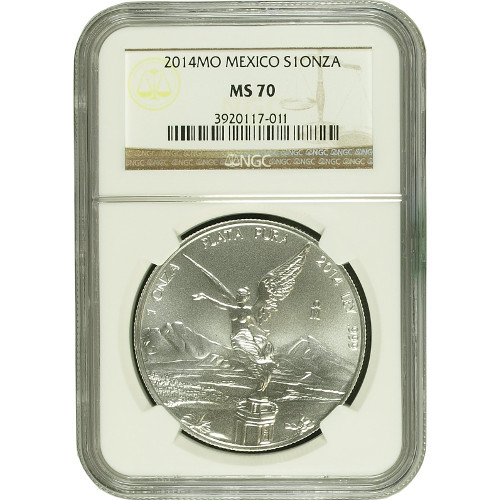 The Bank of Mexico mints one of the world’s most anticipated silver bullion coins each year in the form of the Silver Mexican Libertad. Recognized for its quality and brilliant design, the Libertad is often overshadowed by the profile of its North American neighbors, the Silver Canadian Maple Leaf and the Silver American Eagle. Today, you can own a 2014 1 oz Silver Mexican Libertad Coin from Silver.com with an MS70 grading by the Numismatic Guaranty Corporation.

Mexico’s Libertad coin borrows inspiration for its imagery from the famous Gold Mexico Centenario coins. First minted in 1921, the Centenarios celebrated 100 years of Mexican independence from Spain. The 2014 1 oz Silver Mexican Libertad Coin bears images similar to the Centanarios, though the images have been updated on the Libertad. These Libertad coins were first introduced by the Mexican Mint in 1982.

On the reverse side of the 2014 1 oz Silver Mexican Libertad Coin is the Angel of Victory. Depicted in bare-breasted form with her wings spread wide, the angel is featured atop a pedestal. A similar statue, the Angel of Independence, stands in the heart of Mexico City as a monument to the nation’s independence. Engravings on this side include the weight, purity, metal content, and year of minting in the Spanish language.

The obverse side of the coin features the Mexican Coat of Arms around the outer edge of the coin. The image in the middle is that of an eagle atop a cactus, with a serpent in its beak. A wreath encircling the eagle reads “Estados Unidos Mexicanos,” the official name for the nation of Mexico.

The Mexican Mint is known by many names: La Casa de Moneda de Mexico or the Mexico City Mint. Whatever you call it, the Mexican Mint is the oldest facility of its kind in North America. Spanish conquistadors established the mint in 1535 to process gold discovered in the jungles of Mexico.

If you have any questions about this product, other Silver.com products, or the online purchasing process, don’t hesitate to contact our associates. You can reach us at 888-989-7223, or on the web using our live chat service.