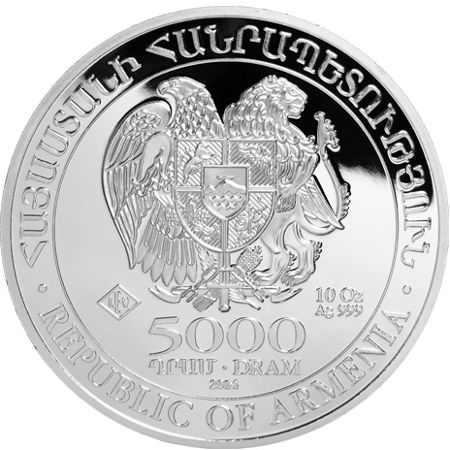 One of the most well-known narratives from the Christian bible is the tale of Noah’s Ark. The 2014 10 oz Silver Armenian Noah’s Ark coin is one weight in a series of coins that is considered the national silver bullion coin of Armenia. This series has been in production since 2011 and is struck at the Geiger Edelmetalle mint in Germany. Each of these coins has been struck in .999 pure silver and has a 5,000 Dram face value.

The story of Noah’s Ark originates in Genesis in the Christian bible. God is so distraught with the behavior and direction of human society that he decides to cleanse the planet with a destructive flood. Due to his pious nature, Noah is spared death and devastation. He is instructed to construct a massive ark and collect two of every animal in the world. His family is tasked with rebuilding humanity and the animal world once the flood waters recede.

Armenia chose the imagery of Noah’s Ark because of its connection to the story and Christianity as a whole. Mount Ararat, the place where Noah’s Ark came to rest after the flood, was once within the borders of Armenia. The wars of the 20th century resulted in boundaries being redrawn, technically removing Mount Ararat from Armenia.

On the obverse side of the 2014 10 oz Silver Armenian Noah’s Ark Coin is the national coat of arms of Armenia. The phrase “Republic of Armenia” is engraved on this side of the coin in both English and Armenian. Additional engravings include the weight, purity, metal content, and year of minting.

The reverse side of the coin features the image of Noah’s Ark as it rests upon the flood waters. Behind it, the rising sun can be seen cresting over a mountain range. In front of it, a dove flies into the picture with an olive branch in its beak. Engravings on this side of the coin include the phrase “Noah’s Ark” in English and Armenian.

If you have any questions about the 2014 10 oz Silver Armenian Noah’s Ark Coins before placing your order, please call Silver.com at 1-888-989-7223. We will also be glad to assist you online through live chat and email. Make sure you look over our entire collections of Foreign Silver Coins for more from this series and others.