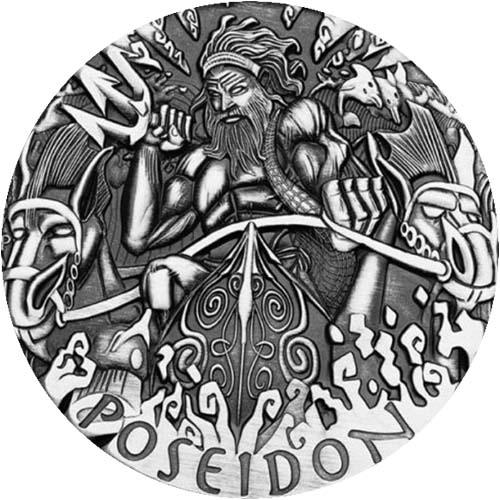 Poseidon is known as the god of the seas and has the power to control storms, earthquakes, and horses. Common symbols associated with the god Poseidon include the trident, fish, dolphin, horse, and bull. The brother of Zeus and Hades, Poseidon is famous for his temper as chronicled in both the Iliad and Odyssey. Right now, 2014 2 oz Antique Silver Tuvalu Gods of Olympus Poseidon Coins are available to purchase online at Silver.com.

Each 2014 2 oz Antique Silver Tuvalu Gods of Olympus Poseidon Coin in this product listing is available to you with an impressive commemorative display. The coins are housed inside of circular, wooden displays that come with a Certificate of Authenticity from the Perth Mint that is numbered to match each coin.

The coins in the Gods of Olympus Series include three releases in all features the three brothers who helped put the gods in control of Mount Olympus. Zeus, Poseidon, and Hades are those three brothers and feature in that same order in the release. The Gods of Olympus Series in 2014 had a companion series issued in 2015 that featured the Goddesses of Olympus, showcasing six of the 12 Olympians who lived on Mount Olympus.

On the obverse side of 2014 2 oz Antique Silver Tuvalu Gods of Olympus Poseidon Coins is a depiction of Queen Elizabeth II in right-profile relief. The Queen is featured here in a design that was created in 1998 by Ian Rank-Broadley for the Royal Mint of England. In this right-profile bust, Her Majesty is shown wearing the Girls of Great Britain and Ireland Tiara. The design was used on British coins from 1998 to 2015, Australian coins from 1999 to 2017, and is still in use for Niue, Tuvalu, and the Cook Islands.

The reverse face of 2014 2 oz Antique Silver Tuvalu Gods of Olympus Poseidon Coins comes with an image of Poseidon. He is riding on a chariot driven by horses and wields his powerful trident in his right hand. The trident is his tool for controlling the waters. Whenever Poseidon is angered, it is said that the seas and the weather reflect his moods.

If you have any questions about these silver coins for sale, please feel free to reach out to Silver.com. Our customer service team is available to you at 888-989-7223, online through our live chat, and via our email address.