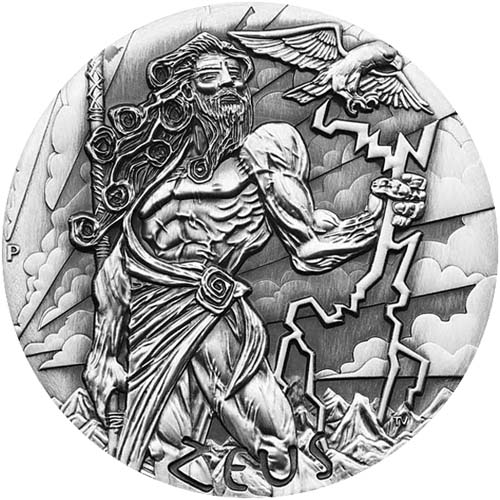 The gods and goddesses of Ancient Greek mythology were said to rule on high from Mount Olympus, their home in the clouds. From here, the Olympians, as the main 12 deities were known, would watch over the cosmos and intervene in the goings-on of the world when and how it benefited each individual. The King of the Gods and ruler of Olympus was Zeus. Now, 2014 2 oz Antique Silver Tuvalu Gods of Olympus Zeus Coins are available to you for purchase online at Silver.com.

Zeus has many roles in Ancient Greek mythology, much like many of the other major gods and goddesses did. Though his primary title was as King of the Gods and ruler of Mount Olympus, he was also considered the god of the sky, lightning, thunder, and even honor and justice. The latter titles were ironic given his personal behaviors according to mythology.

Though Zeus was married to his sister, Hera, he was famous in Greek literature for the number of affairs he had that included both mortal women and other deities of Olympus. Among his offspring were the likes of Hercules and Perseus. Both men were considered Demi-Gods, having some of the power of a god, but also the mortality of a human being.

On the obverse side of 2014 2 oz Antique Silver Tuvalu Gods of Olympus Zeus Coins is a depiction of Queen Elizabeth II. This right-profile bust of Her Majesty is the fourth produced by the Royal Mint of England and was designed in 1998 by Ian Rank-Broadley. The image shows the Queen wearing her favorite piece of jewelry, the Girls of Great Britain and Ireland Tiara.

The reverse face of 2014 Antique Silver Tuvalu Gods of Olympus Zeus Coins includes a depiction of Zeus amidst a stormy backdrop on Mount Olympus. Striking an aggressive pose, he grasps a thunderbolt in one hand and holds his scepter of power in the other. Zeus is known for wielding the thunderbolt, the most powerful weapon of the gods, and throwing it seemingly at random sometimes to strike other gods and even humans.

These 2014 2 oz Antique Silver Tuvalu Gods of Olympus Zeus Coins are available to you with a beautiful circular wooden display box. The box comes with a numbered Certificate of Authenticity from the Perth Mint. Each one of these coins is beautifully struck on a rimless 2 oz silver blank with an antique polish.

Silver.com customer service is available to answer your questions about these silver coins at 888-989-7223. You can also chat with us live online or email us directly.