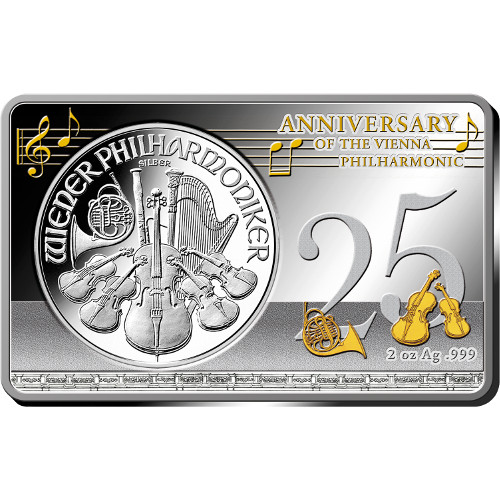 The 25th Anniversary Silver Austrian Philharmonic 2-piece set is a rather unique and interesting tribute to the nation’s official bullion coin. While the nation’s silver bullion coin, bearing the same imagery as the gold coin, has only been in production since 2008, the gold bullion coin is celebrating 25 years of minting. You can own this unique product by purchasing a 2014 3 oz 25th Anniversary Silver Austrian Philharmonic Set from Silver.com.

This 2-piece set is comprised of a 2 oz commemorative silver bar, along with a standard 2014 1 oz Austrian Silver Philharmonic coin. The coin fits perfectly into the bar, creating the 2-piece, 3 troy ounce set.

Austria’s official gold bullion coin was first struck in 1989 and has experienced a sharp increase in both demand and mintage since 2008. A unique facet of the coin is its face value engravings. Coins in the series struck between 1989 and 2001 bear a face value in Austrian Schillings. After joining the European Union and adopting its unifying currency, Austrian Philharmonic Gold coins displayed face values in Euros.

This celebratory silver bar is different than most due to the heavy use of one precious metal to celebrate a coin series struck in the other. Although both coins bear the same imagery, it is the Gold Austrian Philharmonic celebrated on this silver set.

If you have questions about the 3 oz 25th Anniversary Austrian Philharmonic Silver Bar, feel free to contact Silver.com. Our associates are available on the phone at 888-989-7223, through our website’s live chat feature, and via email.