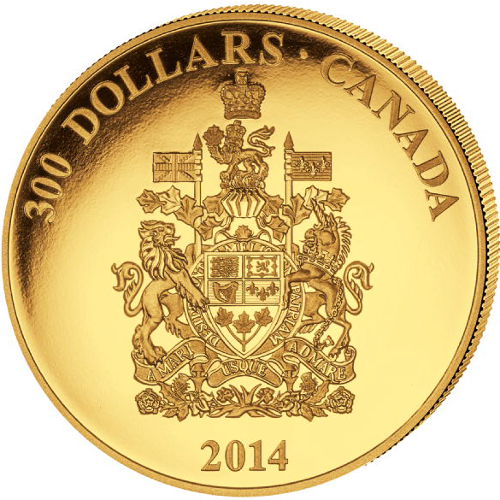 The nation of Canada is split into 13 different municipalities, divided into 10 provinces and 3 territories. Those territories and provinces were celebrated for 13 years by the Royal Canadian Mint with bullion coins bearing the coat of arms from each of those 13 areas. The 2014 $300 Gold Canadian Saskatchewan Coat of Arms coin is now available in Proof condition on Silver.com.

The Provincial Coat of Arms Series from the Royal Canadian Mint was one of the first major coin programs from the mint during the 21st century. Over the course of 13 years, the RCM released a coat of arms design each year representing a different territory or province of Canada.

These 2014 $300 Gold Canadian Saskatchewan Coat of Arms coins have a Brilliant Uncirculated grade. BU coins are identified by the lack of wear and tear on the surfaces, though you may notice flaws such as breaks in the luster, spotted surfaces, and/or contact marks.

On the reverse face of the coin is Saskatchewan’s coat of arms. Featuring the royal lion on the left and a white-tailed deer (official animal of Saskatchewan) on the right, the figures flank a shield with three sheaves of golden wheat. Engravings on this face include the face value of the coin, the nation of issue, and the year of issue.

The obverse bears simple designs. Susanna Blunt’s 2003 depiction of Queen Elizabeth II in right-profile relief is flanked by engravings that read “Elizabeth II” on the left and “D.G. Regina” on the right.

Royal Canadian Mint coins are highly sought-after each year, and the Canadian Maple Leaf is its most popular product. These coins are the last in the Provincial Coat of Arms Series, and supplies are limited, so act now!

Please direct any questions about these unique coins to a Silver.com associate. Our team members are available at 888-989-7223, online using our live web chat feature, and via our email address. If you are interested in similar products, check out our selection of Canadian Gold Coins.