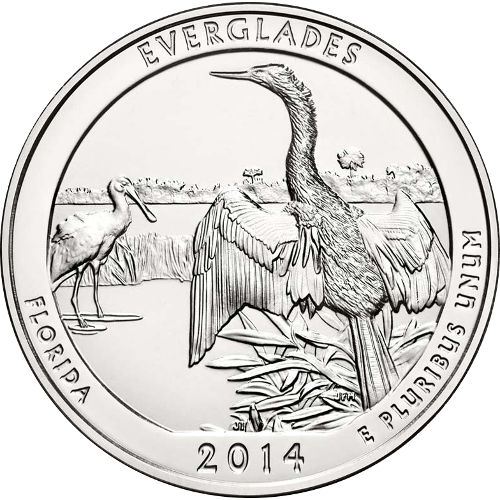 This 5 oz Everglades Silver Coin was released in 2014 and was the 25th release from the United States Mint’s America the Beautiful Silver Coin series. Each Everglades Coin has been struck from 5 troy oz of high quality .999 fine silver. These coins are the last to be released in the series for 2014 and, to preserve their condition, they are carefully packaged prior to transport in either a protective jewelry bag or a sealed tube of 10 pieces.

The obverse of this striking coin offers viewers a glimpse into Florida’s celebrated Everglades National Park. It depicts several of the preservation’s most notable birds in their native marshland swamp. Shown in the foreground of the design is a bird known as the anhinga. It is depicted majestically spreading its wings as it peers off into the distant horizon. In the background behind it is another native bird, called the roseate spoonbill which is wading in the shallow waters, perhaps in search of food. Aviary enthusiasts will be sure to appreciate both the accurate portrayal of these two unique birds as well as their native habitat. Inscribed along the outer edge of the coin are its mintage year accompanied by the words, “Florida,” “Everglades,” and “E Pluribus Unum.”

Displayed on the reverse of the coin is a portrait of George Washington. It was designed by artist, John Flanagan in 1932 for the artwork of the eponymous Washington quarter. It depicts the United States’ first president turned in profile to his left and attired in his trademark powdered wig. Serving as a frame to Washington’s dignified profile is a ring of text, which includes the nation’s title and the coin’s denomination. The phrases, “Liberty” and “In God We Trust” are engraved to the left and right of his profile respectively.

The 2014 5 oz Everglades ATB Silver Coin offers an inspiring tribute to Florida’s wildlife and scenery that will appeal to both collectors and investor. To learn more about these coins or if you have any questions before ordering,you can reach Silver.com at 888-989-7223. A customer representative can also be reached through the website’s live chat feature or by email. For more coins from the US Mint’s America the Beautiful Series, please visit the ATB Silver Coins section on our website.