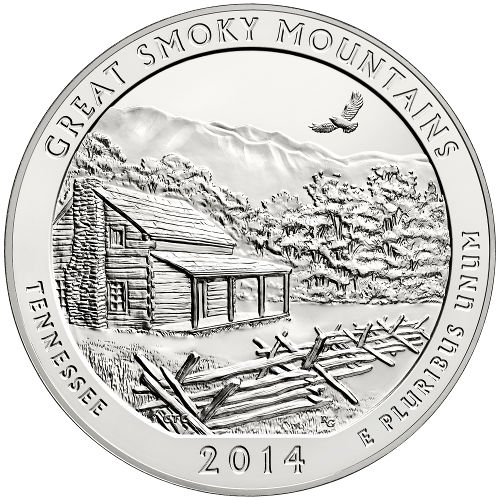 Produced by the United States Mint, the “America the Beautiful” series commemorates the nation’s most recognized landmarks, national parks, and historical places. The series began in 2010 and is currently scheduled to run through 2021. Due to its great success and popularity, however, it is likely that the mint will expand the series. Thus far, each of the nation’s states and territories will be featured with their own coin.

The 2014 5 oz ATB Great Smoky Mountains Silver Coin features the Great Smoky Mountains National Park, which is also listed as a UNESCO World Heritage Site. U.S. President Franklin D. Roosevelt dedicated the park in 1940 because of its immense natural beauty evidenced by pristine streams and extraordinary mountain views. Each coin lists the “Great Smoky Mountains,” the state of “Tennessee,” and the year of issue “2014.” The coin also includes the phrase “E Pluribus Unum.” The obverse side showcases George Washington. Each coin has been struck in five troy ounces of .999 pure silver.

Because we receive all of our products from the mints or our reputable distributors, customers can trust in their authenticity. Each ATB coin is packaged safely, using bubble wrap and other soft materials to protect their condition. As an additional protection, we also insure every mailing and require a signature upon delivery for orders over $1,000.

You can direct any questions about these coins towards one of our staff members at 888-989-7223. You can also get in touch directly online through email or live chat. We hope you will also take a look at our other silver ATB coins, which include the 2014 5 oz Arches ATB Silver Coin and the 2014 5 oz Shenandoah ATB Silver Coin among others.