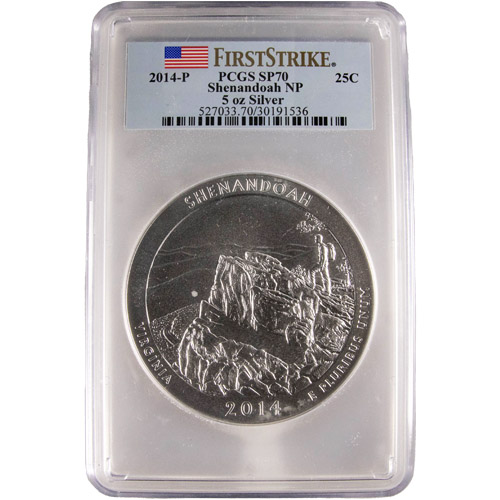 America is replete with stunning landscapes and country vacation spots, and Shenandoah National Park in the Blue Ridge Mountains of Virginia stands out among the best. A virtual paradise for hikers, birdwatchers, or simply for tourists and vacationers looking for a weekend getaway, this park was first dedicated in 1936 by President Franklin Roosevelt. Its natural vistas are commemorated by the limited-issue 2014 5 oz Silver ATB Shenandoah Coin.

The U.S. Mint began to issue the America the Beautiful Quarters series in 2010, with the evental goal of celebrating iconic sites throughout all fifty states and the Federal District of D.C., and Shenandoah National Park became a part of this showcase with the second issue of 2014. This lustrous bullion quarter features detailed artwork by an award-winning sculptor and will appeal to discerning collectors and lovers of the outdoors.

Silver.com ships these ATB coins in plastic slabs courtesy of the PCGS. These coins are Specimen 70 coins that showcase full, original mint luster with no detractions present. First Strike designations indicate these coins were received for grading within 30 days of the initial release date from the mint.

The reverse side of this coin carries a remarkably detailed image of a hiker reaching the summit of the scenic Stony Man Trail. It’s the kind of striking artwork that won a Renaissance Sculpture Award from the Franklin Mint for creator Phebe Hemphill. It also features the inscriptions “SHENANDOAH,” “VIRGINIA,” “2014,” and “E PLURIBUS UNUM.”

The obverse side of the 2014 Silver ATB Shenandoah Coin features a profile portrait of George Washington, using John Flanagan’s 1932 design — based on a firsthand sculpture created in 1786 — that honored the first President’s 200th birthday. It’s a design that has since become familiar on the nation’s circulation quarter. The obverse also bears the inscriptions “UNITED STATES OF AMERICA,” “LIBERTY,” “IN GOD WE TRUST,” and “QUARTER DOLLAR.”

Silver.com’s customer service line is available for questions about silver for sale at 888-989-7223. You can also chat with us live online or reach out with any inquiries by e-mail.