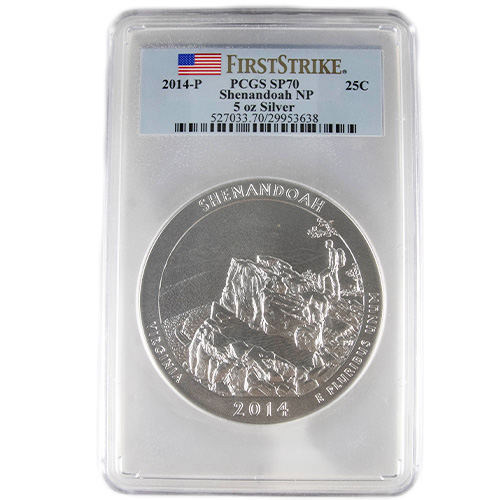 Introduced in 2010, the America the Beautiful Series is one of the most diverse and complex collections the US Mint has ever released. With release dates ranging from 2010 to 2021 and a total of five designs issued each year, the Silver ATB Series offered a stunning 56 different coins for investors and collectors to purchase. Now, 2014 5 oz Silver ATB Shenandoah Coins are available to you for purchase online at Silver.com in perfect condition.

The Silver ATB Series consisted of five new designs for each date mark in the series, stretching from the first offerings in 2010 to the final, singular design in 2021 that brought the series to a close with the 56th release. Each release honored a different US state, territory, or federal district.

When it came to deciding the order of the coin releases in the series, the US Mint followed the precedent set in the previous State Quarters program for the circulation 25-cent piece. Each jurisdiction and park debuted in the series based on the age of the site in question to represent a state. For example, as the oldest federally protected site in the nation, what is now Hot Springs National Park in Arkansas was chosen as the first release in the series as the collection went from oldest to youngest.

The obverse side of 2014 5 oz Silver Shenandoah Coins comes with a portrait of President George Washington. The first Commander-in-Chief of the United States, Washington served two terms as the nation’s first president and had his 200th birthday honored in 1932 with the ascension of his portrait to the obverse of the US Quarter, replacing the Standing Liberty Quarter design in the process.

On the reverse field of 2014 Silver ATB Shenandoah Coins, you will find a depiction of a hiker reaching the summit of Stony Man Trail. Shenandoah National Park is located in the Blue Ridge Mountains of Virginia.

These 2014 5 oz Silver ATB Shenandoah Coins are available to purchase online in perfect condition. The PCGS assigns an SP70 grade to coins that showcase full, original mint luster and come with no detractions.

Silver.com customer service is available at 888-989-7223. Additionally, you can chat with us online or simply send us an email with your inquiries about silver for sale.