One of the most complex coin designs featured on a sovereign silver coin each year is the image of Britannia featured on British coins. The Silver Britannia coin is produced annually by the Royal Mint and has been struck, in some form, for several centuries. The 2014 Horse Privy coin from the Royal Mint is a truly unique product, and has a low mintage that makes it a must-have product. For a limited time, you have the chance to purchase a 2014 Horse Privy Silver Britannia from Silver.com with an MS69 grade from the Numismatic Guaranty Corporation.

When the NGC issues an MS69 grade to a coin, it signifies that the product has its original luster and no more than two blemishes visible on its surface. The particular coins included in this product listing are considered proof-like. A proof like coins is one whose fields possess a mirrored finish and slight frost on the design, creating a cameo-like effect similar to that found on true Proof coins.

The grade and finish of this coin only add to its uniqueness. The prominent feature of the special-edition coin from the Royal Mint is the manner in which the Mint celebrated the Year of the Horse in 2014. Rather than including a horse somewhere on the iconic design of the Britannia, the Mint put engravings on the outer edge of the coin for the first time in its history. The horse privy is featured along the edge of each 1 oz. coin.

On the reverse side of these 1 oz. Horse Privy Silver Britannia’s is the image of Britannia herself, standing guard over the English Channel with her trident in one hand and her Union Jack-emblazoned shield in the other. The obverse side displays Ian Rank-Broadley’s image of Queen Elizabeth II.

The Royal Mint has existed as an institution within the United Kingdom since 886 when it was founded as the London Mint. All Silver Britannias contain .999 fine silver and have a face value of £2 (Pounds). Only 435 of these coins were minted, so act quickly.

If you have questions for Silver.com associates about this Horse Privy Silver Britannia, please contact us at 888-989-7223, chat with us using our live service, or send us an email. 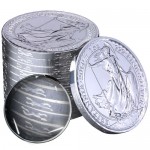