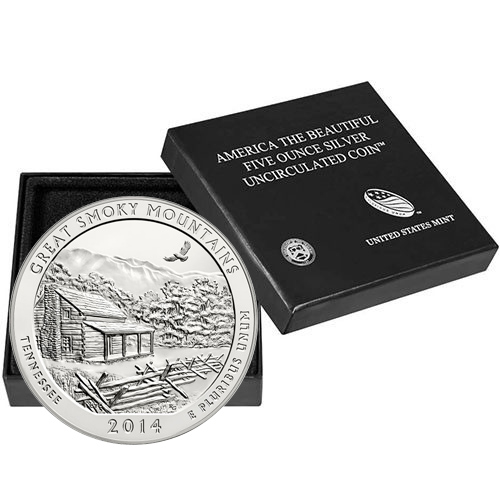 Once as tall and majestic as the Rocky Mountains, the Appalachian Mountains that run the length of the eastern seaboard of North America represent the oldest mountain range on the continent. Time, weather, and tectonic changes have resulted in the Appalachians shrinking to heights below those of the peaks in the Rockies, but there is plenty of charm in the Appalachians. The 2014-P 5 oz Burnished Silver ATB Great Smoky Mountains Coins are currently available to you for purchase online at Silver.com.

The park was established in 1934 to protect the natural environment within the mountain range and the wildlife that calls the area home. Today, the site is not only a US National Park, but also a UNESCO World Heritage Site. There are 78 structures within the national park also preserved along with the local environment.

The obverse of 2014 Burnished Silver ATB Great Smoky Mountain Coins features the left-profile portrait of George Washington. The nation’s first president is featured here in a design originally created in 1932 for the quarter.

All of these 2014-P Burnished Silver ATB Great Smoky Mountain Coins comes to you with a US Mint display box, Certificate of Authenticity, and a “P” mint mark from the Philadelphia Mint which strikes all of the burnished coins in the series.

We encourage Silver.com customers to contact us with questions about buying silver at 888-989-7223. You can also connect with us online using our live chat and email address.