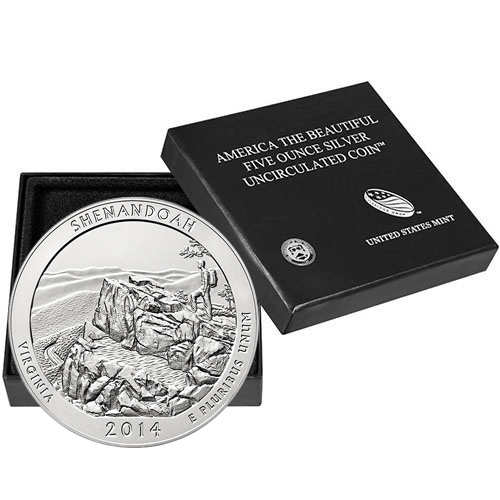 If you regularly buy silver from collectible issues at the United States Mint, the burnished silver coins of the America the Beautiful Series are a must-have precious metal coin. The 56-coin series debuted in 2010 and runs through 2021 with a diverse array of designs representing every state, territory, and federal district in the United States. Today, 2014-P 5 oz Burnished Silver ATB Shenandoah Coins are available to you online at Silver.com.

Attempts to establish the national park that would become Shenandoah National Park began as early as 1901 when Virginia congressman Henry Flood pushed legislation that had the backing of President Theodore Roosevelt. The legislation failed to pass though and it would be another 18 years before a national park was even established on the East Coast of the United States. Acadia broke the western domination of national parks in 1919, and Shenandoah would follow with Great Smoky Mountain National Park in 1926.

On the reverse of the 2014-P 5 oz Burnished Silver ATB Shenandoah Coins, you’ll find the image of a hiker reaching the summit of a hiking trail within the park. The highest peak in Shenandoah National Park is Hawksbill Mountain which rises to a height of 4,051 feet.

The obverse face of 2014 Burnished Silver ATB Coins includes the left-profile portrait of President George Washington. The portrait featured here is also found on the circulation US quarter and was created in 1932 by John Flanagan on the president’s 200th birthday. Flanagan’s design is based upon a 1786 bust of a young Washington sculpted before he became president.

Please feel free to reach out to Silver.com with your questions. You can call our customer service team on the phone at 888-989-7223, chat with us live online, or simply send us an email with your inquiries.