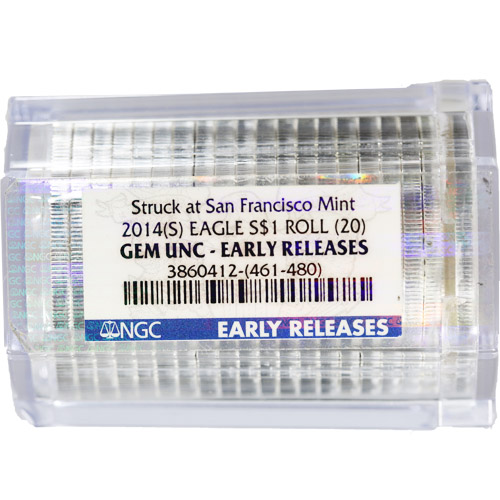 2014 Silver Eagles released by the United States Mint represented a then-record mintage. From 2008 to 2015, the Silver Eagle Series set a new mintage record in seven of the eight date marks during the period. The 2014 was a record at the time and remains the second-highest mintage in the history of the series behind only its immediate predecessor, the 2015 coin. Silver.com offers the 2014 Silver American Eagles with an NGC Gem Roll.

All of the 2014 Silver American Eagles listed here come housed inside of a protective NGC Gem Roll. There are a total of 20 individual coins from the 2014 release inside of this distinctive, sturdy NGC Gem Roll. All of the coins have been identified as Early Release coins by the NGC, indicating the coins arrived at the NGC within 30 days of the initial release from the US Mint.

The obverse of 2014 1 oz Silver Eagles features the depiction of Walking Liberty. Designed in 1916 by Adolph A. Weinman, this iconic design was first used on the US half dollar and has served as the symbol of the Silver Eagle bullion series since 1986.

On the reverse field of the 2014 1 oz Silver American Eagle is an image of the heraldic eagle of the United States. The concept of the national seal dates to 1792 and first appeared on US coins in 1794. It was modernized for this series in 1986 by John Mercanti. It depicts the bald eagle, US national shield, arrows of war, olive branch of peace, and a triangular cluster of 13 stars.

Please contact Silver.com with any questions. Our team is available at 888-989-7223, online through our live chat, and via our email address.