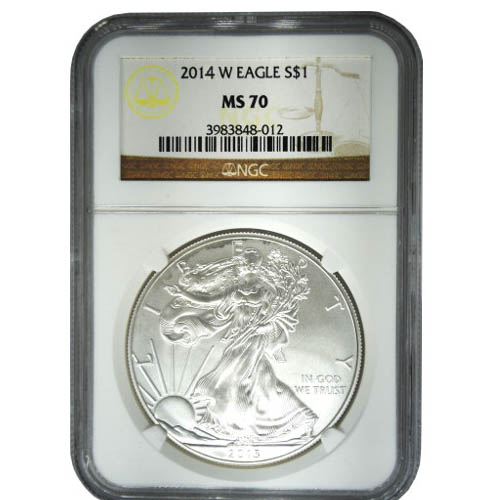 The Silver Eagle series from the United States Mint has one of the highest mintage figures you’ll find in any precious metal collection. The bullion version of the coin once hit a high of 47 million coins in one year in 2015 and has continued to sell millions. The burnished version, however, has much lower figures. Today, 2014-W 1 oz Burnished Silver American Eagle Coins are available to you online at Silver.com.

Burnished Silver American Eagle coins have the lowest mintage figures among the three options in the Silver Eagle collection. In 2014, for example, the Silver Eagle bullion coin sold 44.006 million coins while the proof coins had a mintage of 944,757. Comparatively, the 2014-W 1 oz Burnished Silver American Eagle coin had a mintage of just 253,169 coins.

The obverse of Burnished Silver American Eagle coins includes the depiction of Walking Liberty. One of two impressive designs created by Adolph A. Weinman for American coinage in 1916, Walking Liberty is representative of the nation’s drive toward a constantly brighter future as she walks toward the sun on the horizon.

On the reverse of all 2014-W 1 oz Burnished Silver American Eagle coins, you’ll find the image of the heraldic eagle of the United States. Created in 1794 on the first American coinage from the original Philadelphia Mint, this design was modified in 1986 for the Silver American Eagle coins. Former engraver John Mercanti developed this modern depiction of the US heraldic eagle.

All Burnished Silver Eagle coins undergo a unique coining process. The silver blanks are first burnished in a drum, where they tumble around with a burnishing medium that brings out unique luster and brightness on the blanks. The coins are removed by hand, loaded into the coining presses by hand, and individually removed and immediately packaged after striking.

Please feel free to reach out to Silver.com with your questions. You can contact us at 888-989-7223, chat with us live online, or simply send us an email with your inquiries.