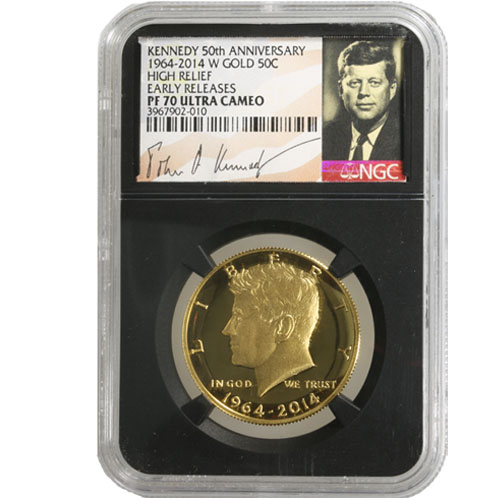 No US President ever made it onto national currency as quickly as President John F. Kennedy following his assassination in Dallas, Texas, in November 1963. Designs for a new half-dollar coin with his likeness were ready by January 1964 and into circulation by March 1964. In 2014, the US Mint honored the 50th Anniversary of its debut with a .9999 fine gold half-dollar coin. Now, 2014-W Gold 50th Anniversary Kennedy Half Dollar Coins are available to you for purchase online at Silver.com in perfect condition.

Following his assassination on November 22, 1963, there was a groundswell of support for putting President Kennedy’s face on the circulating half-dollar coin in place of Benjamin Franklin. The design of Franklin had only been on the coins at that point since 1948, but the nation needed an immediate means of remembering the hope that President Kennedy once embodied.

Two United States Mint Sculptor-Engravers worked on the designs for the Kennedy Half Dollar that was released in 1964. Gilroy Roberts worked up the bust of President Kennedy based on a portrait used on his presidential medal, and Frank Gasparro came up with his own rendition of the Presidential Seal. Both of those original designs are still on the current half-dollar coin and now feature on these 2014 Gold 50th Anniversary Kennedy Half Dollars.

On the obverse of the 2014-W Gold 50th Anniversary Kennedy Half Dollar is Roberts’ left-profile portrait of President John F. Kennedy. His image is surrounded by engravings of “Liberty,” “In God We Trust,” and “1964-2014.”

The reverse side of the 2014-W Gold 50th Anniversary Kennedy Half Dollar features Gasparro’s vision of the Presidential Seal. It includes the American bald eagle with the national shield on its chest, an olive branch in one talon, and 13 arrows clustered in the other talon. Engravings here include “United States of America,” “Half Dollar,” “3/4 oz .9999 Fine Gold,” and a “W” from the West Point Mint. The eagle is also surrounded by a circle of 50 stars.

These 2014 Gold 50th Anniversary Kennedy Half Dollar coins earned a PR70 certification from the NGC. Coins in this condition showcase full, original mint luster and no detracting flaws. As UCAM specimens, each coin features strong, frosted designs overlaying deeply-mirrored, clear background fields. The Early Release label indicates the coins were received for certification within 30 days of their initial release from the US Mint.

We encourage Silver.com customers to call us with questions at 888-989-7223. You can also connect with us online through our live chat or email address.