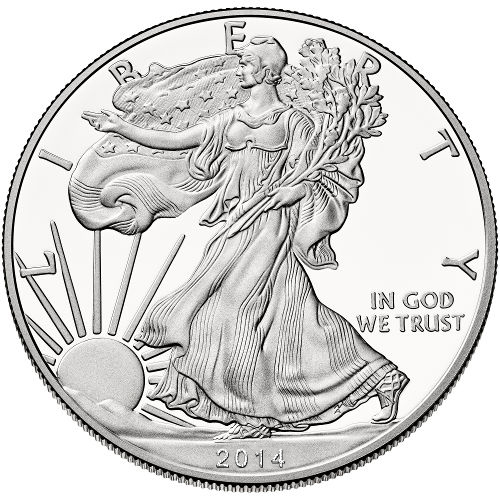 The Silver American Eagle coin was setting a new sales record each year from 2008 to 2011 as the nation struggled through the Great Recession. Even though the economy was showing signs of strength and recovery by 2014, the Silver Eagle coin series would set an all-new sales record at 44.3 million coins.

It didn’t appear at first that the Silver Eagle would break any records though. In 2013, the Silver American Eagle sold just 34 million coins. Opening day sales totaled 3.2 million coins, which represented a decline from the opening day of 2013. However, a lower silver price in September led to explosive demand for the coins.

In September and October the Silver American Eagle set a two-month record with 10 million coins sold. At various points throughout 2014, the United States Mint was forced to reinstate its allocation program to sustain the program throughout the year. The Silver Eagles were sold out for 2014 by December 24th.

After 39 years out of circulation, the Walking Liberty design was chosen in 1986 as the official obverse design of the Silver American Eagle. This depiction of Liberty walking toward the sun represented America’s drive toward a brighter future, and originally featured on the Walking Liberty Half Dollar from 1916 to 1947.

On the reverse of the Silver American Eagle is John Mercanti’s depiction of the heraldic eagle of the United States. Mercanti was the Chief Engraver of the United States Mint starting in 1986, and held the post until 2010 when he retired. He has yet to be replaced in the position.

Please direct any of your questions to a Silver.com associate. You can reach us at 888-989-7223, connect with us online using our live web chat, and email us with any inquiries you might have.