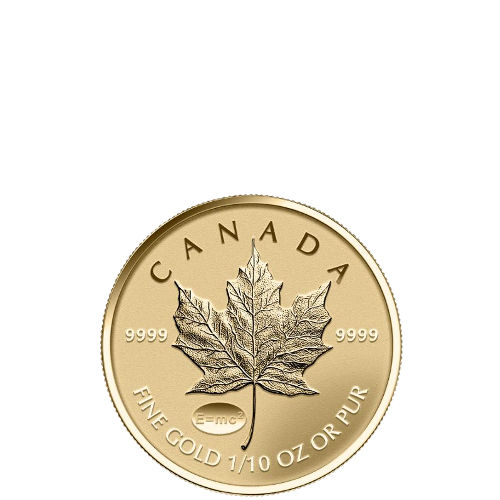 The Gold Canadian Maple Leaf is the coin that broke the mold, and destroyed the grip of the South African Krugerrand on the global market. At a time when the Krugerrand was the coin among precious metal enthusiasts, the Royal Canadian Mint introduced a bullion product that has become one of the most popular in the world. Today, the 2015 1/10 oz Gold Canadian Maple Leaf Theory of Relativity Coin is available on Silver.com.

More and more often investors are buying gold in fractionals to meet their needs because of their divisibility. Gold spot price changes frequently, but can always be divided or multiplied to get your fractional piece’s spot value.

Gold Canadian Maple Leaf coins were introduced to the global market starting in 1979 as a substitute and competitor for the Krugerrand. In an effort to pressure the South African government into ending its system of apartheid, Western nations boycotted South African goods and commerce, including the popular Krugerrand.

On the reverse side you’ll find the familiar maple leaf image in the center, along with the enhanced security features of micro-laser engraved radial lines and a maple leaf privy mark, both introduced in 2015. Additionally, the Theory of Relativity is engraved below as “E=MC2.” 2015 marks the 100th anniversary of Albert Einstein’s landmark theory.

The obverse bears Queen Elizabeth II’s right-profile portrait. Designed in 2003 by Susanna Blunt, it is just the third-generation version of the Queen’s effigy to appear on Canadian coins. It is accompanied by engravings of her name, “D.G. Regina,” and the face value of the coin.

The Royal Canadian Mint is one of the most respected facilities in the world, and operates out of refineries in Ottawa and Winnipeg.

If you have questions for a Silver.com associate, please feel free to call us at 888-989-7223. We’re also available online using our live chat and email features. To see similar products, visit our Gold Maple Leafs page.