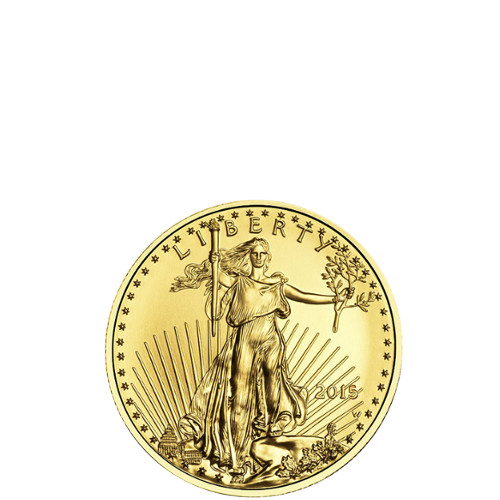 This product listing is for 2015 1/10 oz Gold American Eagle coins in brilliant, uncirculated condition. Each of these coins contains one-tenth troy ounce of pure gold and has a $5.00 USD face value. In the aftermath of the Revolutionary War, the Founding Fathers of America sought to establish a government unlike any the world had seen before. Those early leaders of the nation selected the bald eagle as the nation’s official emblem because of what the creature represented. The eagle is known for its power, majesty, and longevity. These were all traits America’s leaders believed were shared by the young nation and its populace.

In an effort to establish an American gold bullion coin in a leading position in the global bullion market, Congress authorized the production of the Gold American Eagle coin series following passage of the Gold Bullion Coin Act of 1985. The US Mint was authorized to produce coins in 1/10, 1/4, 1/2, and 1 oz denominations using gold sourced from within the United States. Today, the 2015 1/10 oz Gold American Eagle is part of the official bullion coin series of the federal government, and is recognized around the world as one of the finest gold bullion products.

On the obverse side of the 2015 1/10 oz Gold American Eagle coin is Augustus Saint-Gaudens’ image of Lady Liberty. First issued on the $20 Saint-Gaudens Gold Double Eagle commissioned by President Theodore Roosevelt, this image depicts Lady Liberty emerging in front of a rising sun. She walks with a torch in her right hand and an olive branch in her left, as her robes flow about her in the breeze. Engravings include “Liberty” and the year of minting. Her image is surrounded by stars representing all US states.

The reverse side of the coin depicts a male eagle returning to his nest, where a female eagle guards the family’s eggs and hatchling. Sculptor Miley Busiek designed the image, which is flanked on either side by the engravings “E Pluribus Unum” and “In God We Trust.” Additional engravings include “United States of America” and “1/10 oz. Fine Gold ~ Five Dollars.”

The US Mint is solely responsible for the production of 2015 1/10 oz Gold American Eagle coins. The mint operates from four primary facilities and has been open since its creation in 1792.

Customer satisfaction is paramount at Silver.com and is our top priority. If you have any questions about the 2015 1/10 oz Gold American Eagle Coins, don’t hesitate to contact our associates at 888-989-7223. Conveniently, you can also contact us online through our live web chat function during business hours. 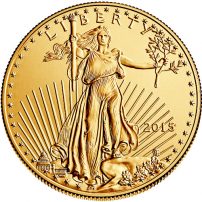