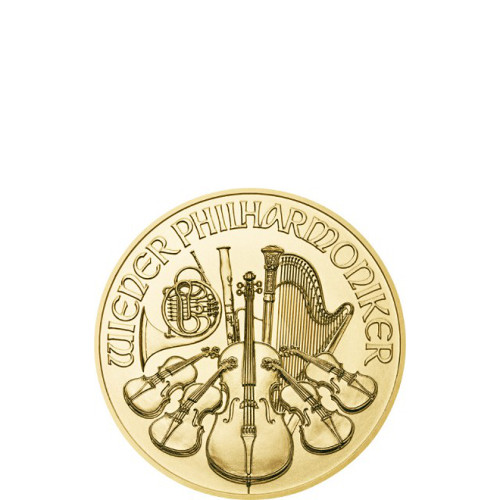 The arts and culture of a nation say a lot about the progress that particular society has made during the course of human history. In the nation of Austria, one of the national treasures is the Vienna Philharmonic Orchestra. One of the world’s oldest musical performance groups, founded in 1842, it is the inspiration for the 2015 1/10 oz Gold Austrian Philharmonic Coin. Produced by the Austrian Mint, you can purchase this coin today from Silver.com in brilliant uncirculated condition.

The Vienna Philharmonic orchestra performs at the Musikverein Golden Hall in Austria’s capital city of Vienna. For more than 170 years, the orchestra has dazzled listeners with stunning music. Beginning in 1989, the Austrian Mint launched the nation’s official gold bullion coin with the orchestra as the source of inspiration behind the design. Thomas Pesendorfer, the chief engraver at the Austrian Mint, was responsible for designing the images used on the obverse and reverse sides of the coin. Like many other official bullion coin programs, the images do not change from year to year.

On the obverse side of the 2015 1/10 oz Gold Austrian Philharmonic coin is Pesendorfer’s depiction of the pipe organ found inside the Musikverein’s Golden Hall. Engravings on this side of the coin are in Austrian and include “Republik Osterreich” and the face value, weight, purity, and metal content of the coin.

The reverse side of the coin contains the image of numerous instruments used by the performers in the Vienna Philharmonic. Included in the image are four violins, a cello, a bassoon, a harp, and a Vienna horn. The lone engraving on this side is located above the cornucopia of instruments and reads “Wiener Philharmoniker.”

If you have any questions about these coins, or other products on our website before placing your order, don’t hesitate to contact a Silver.com associate at 888-989-7223. You can also reach us online during business hours by using the live web chat feature located on the contact page.