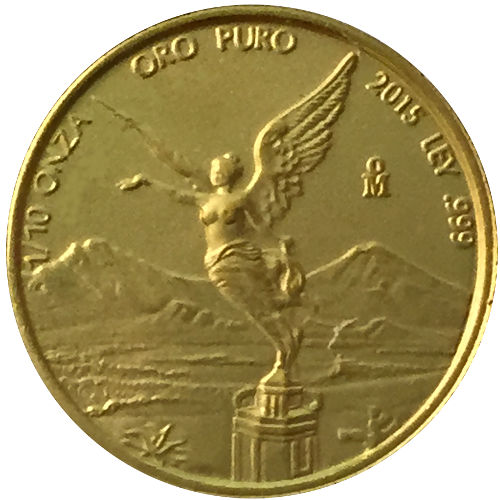 When it comes to investing in gold bullion coins, the 1/10 oz weight is becoming the favorite choice of investors everywhere. Coins in this weight offer the greatest balance between price and gold content, making them easier to purchase and store. Among the rising stars of the numismatic world is the 2015 1/10 oz Gold Mexican Libertad, which is currently available on Silver.com.

As the nation of Mexico celebrated its 100th year of freedom in 1920, the Mexican Mint unveiled a brand-new coin design featuring inspirational cultural icons. On one side of the coin, the angel of independence that served as a source of pride and hope during the War of Independence. On the other, the coat of arms adopted by the young nation during its battle against Spain.

The historic gold Centenario was produced from 1920 to 1947, and again from 1949 to 1972 as a reproduction, with each coin featuring a 1947 year of minting. In 1982, the Mexican Mint released the modern Gold Mexican Libertad, the successor the Centenario. These 2015 1/10 oz Gold Mexican Libertads have a refined image of Winged Victory on the obverse.

On the reverse side of the coin is the latest version of the Mexican coat of arms. In the depiction, an eagle is featured on top of a cactus branch as it struggles to control a serpent with its talons, and strikes back with its beak. The official seal of Mexico, this coat of arms has been altered numerous times since the nation’s founding.

The obverse bears the image of the angel of independence. Her statue in Mexico City is referred to as Winged Victory. Erected in 1920 during the centennial celebrations, today the Winged Victory statue is the official symbol of the nation’s capital city.

Each of these coins is a product of the Mexican Mint, which strikes the Libertad under the authority of the national bank: Banco de Mexico.

If you have any questions, please don’t hesitate to reach out to a Silver.com associate at 888-989-7223, connect with us online using our live chat, or send us an email. If you are interested in similar products, be sure to check out our full selection of Mexican Mint coins.