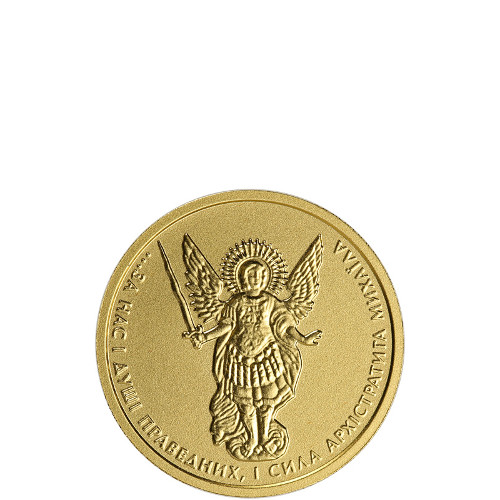 Archangel Michael is well known in Christian, Jewish and Islamic religions as the healer of the sick. He is also known as the leader of God’s army. He is said to have led all the other angels to defend Heaven against an enemy that is often referred to as a dragon, Satan and the devil.

To those in Ukraine, the Archangel Michael is known as the protector of Kiev, the country’s capital city. These coins are produced by the National Bank of Ukraine, and they are loved by Ukrainians, as well as people all over the world.

On the obverse of each 2015 1/10 oz Gold Ukrainian Archangel Michael Coins, you will see the National Bank of Ukraine’s depiction of the Saint Michael wearing a full suit of armor. Above his head, you will see the halo of sunlight, which symbolizes that he is an angel. With his wings outstretched, he wields a sword to defeat the dragon that he stands atop.

The reverse of each coin shows the Ukrainian Coat of Arms. Surrounding the image of the coat of arms, you will see a number of engravings all in Ukrainian.

Each of the coins in this listing will arrive to you in Brilliant Uncirculated condition. Coins in this condition will show no signs of wear and tear, but they may have some minor flaws. These minor flaws include breaks in the luster, spotted surfaces and contact marks that are produced during the striking process.

If you have any questions, Silver.com associates are happy to help. You can reach us at 888-989-7223, chat with us live online, or submit your questions to us via email.