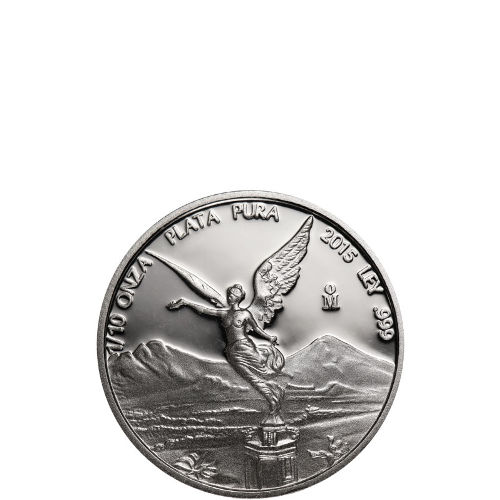 Numismatists are constantly on the hunt for the next great coin to add to their collection. In recent years the collector’s version of the official silver bullion coin of Mexico has gained traction in the global marketplace. Once overshadowed by its North American neighbors, the Mexican Mint’s Silver Mexican Libertad is now a popular product. Today, the 2015 1/10 oz Proof Silver Mexican Libertad Coin is available on Silver.com.

In 1981, the Banco de Mexico authorized the production of an official bullion coin for the nation of Mexico. The design chosen was that of the original gold Centenario coin first struck in 1921. Historic and patriotic images of the Angel of Independence, the twin volcanic peaks of Popocatepetl and Iztaccihuatl, and the nation’s coat of arms.

Proof Silver Mexican Libertad coins were not introduced until 1986 for annual production, despite the 1982 introduction of a bullion version. The coin was available only in a one ounce weight until 1992, when the four fractional-weights were introduced. Along with the 1/10 oz Proof Silver Mexican Libertad, there is a 1/20 oz, ¼ oz, and ½ oz fractional-weight coin produced each year.

The obverse face of each coin bears the image of the Angel of Independence in a left profile relief, with the valley surrounding Mexico City visible in the background leading to the volcanic peaks. Engravings include the weight, metal content, year of minting, and the purity of the silver. An “OM” mint mark identifies the Mexican Mint as the producer.

On the reverse of all fractional-weight Proof Silver Mexican Libertad coins is the image of the modern coat of arms for Mexico. The design includes an eagle in battle with a serpent, surrounded by a wreath below and the words “Estados Unidos Mexicanos” above.

The Mexican Mint is the sovereign mint facility of the federal government in Mexico. The Proof Silver Mexican Libertad coin is gaining popularity for its status as a legal tender, sovereign mint coin, but also because of the low mintage numbers from the Mexican Mint compared to other comparable coins.

If you have questions, Silver.com associates are available at 888-989-7223, online via live chat, and through email. If you are looking for similar products, be sure to check out our Mexican Mint page.