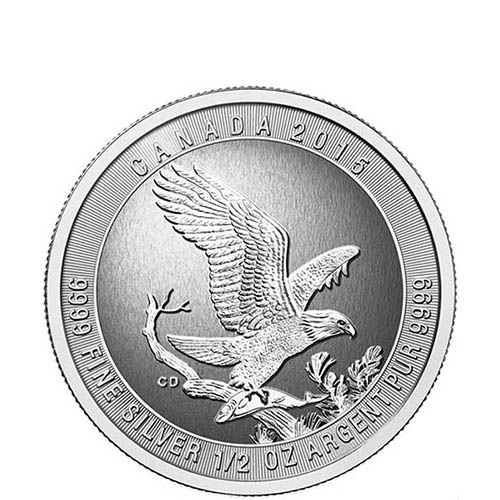 The bald eagle is actually a species of sea eagle that consists of two subspecies, forming what is known as a species pair with the white-tailed eagle. The official symbol and animal of the United States, the bald eagle is found throughout Canada as well and features prominently on numerous silver coins released by the Royal Canadian Mint. The 2015 ½ oz Silver Canadian Bald Eagle Coin is one such example and is available to you today online at Silver.com.

The use of the term “bald” in bald eagle originates from an older meaning of the word “white-headed.” Adult bald eagles are primarily brown with a white head and tail, while immature eagles are entirely brown in color.

Bald eagle may be the national bird and animal of the United States of America, but their home territories in North America stretch from as far north as Alaska, throughout Canada, and down in the contiguous 48 states of the US and the northern reaches of Mexico.

On the reverse of all 2015 ½ oz Silver Canadian Bald Eagle Coins you’ll find the image of a bald eagle coming down from flight to land on its perch on a branch, complete with a meal of fish in its talons. Bald eagles are known to build the largest nest of any North American bird, and holds the record for the largest tree nest of any animal species with sizes up to 13 feet deep and 8.2 feet wide.

The obverse of all Silver Canadian Bald Eagle Coins features the right-profile portrait of Queen Elizabeth II. Created in 2003 by Susanna Blunt, this is the latest effigy of Queen Elizabeth II in use on Canadian coinage. Both sides of the coin feature the Royal Canadian Mint’s laser-engraved radial lines for added security against counterfeiting.

All 2015 ½ oz Silver Canadian Bald Eagle Coins in this listing are available in BU condition. Coins in BU condition have no signs of wear and tear, but there are minor flaws present. These flaws range from breaks in the luster and spotted surfaces to contact marks as a result of striking the blanks during production.

Headquartered in the federal capital of Ottawa, the Royal Canadian Mint was founded as the nation’s sovereign mint in 1908. It expanded in the 1980s to include a location in Winnipeg.

We encourage Silver.com customers to call us at 888-989-7223 with questions. You can also reach out to us online using our live chat and email address.