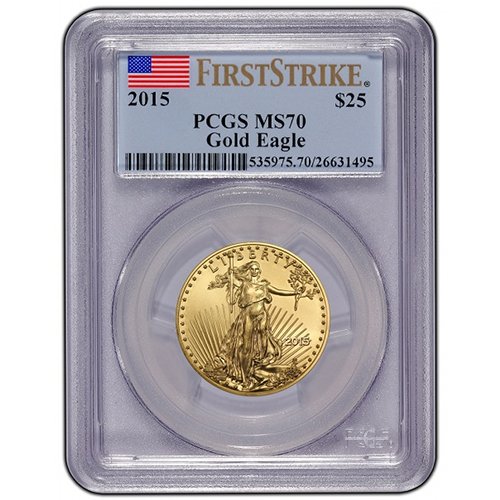 The bald eagle was chosen by the Founding Fathers in 1792 as the national emblem of the fledgling nation. Selected out of respect for its power, majesty, and longevity, the eagle held characteristics that America’s early leaders believed the people of the United States possessed as a nation. This 2015 1/2 oz Gold American Eagle is available with MS 70 grade from PCGS and is part of the First Strike series. First Strike labels designate that the coins were received by PCGS within the first 30 days of the coin’s release.

Gold American Eagle Coins were authorized by Congress under the Gold Bullion Coin Act of 1985. The first coins available to the public from the US Mint hit the market in 1986. Since then, the design of the Gold American Eagle coin has not changed, with these 2015 1/2 oz. Gold American Eagles bearing the same images that have graced the obverse and reverse sides of the coins for almost 30 years.

On one side is August Saint-Gaudens’ image of Lady Liberty. In the image, she is seen walking toward the viewer with the rising sun at her back. Lady Liberty appears on the coin with her hair flowing in the breeze, an olive branch in one hand, and a torch to guide America in the other. The opposite side carries sculptor Miley Busiek’s image of a male eagle returning to the nest, which features a female eagle guarding the eggs and hatchlings.

The obverse side of the 2015 1/2 oz Gold American Eagle boasts Saint-Gaudens’ iconic imagery. Lady Liberty is featured alongside engravings of “LIBERTY” and the year of minting (2015). On the reverse side, the image of the family of eagles is encircled by engravings of “United States of America,” “E Pluribus Unum,” “In God We Trust,” and the weight, purity, metal content, and face value ($25) of the coin.

The US Mint produces all of the commemorative and circulation coins distributed by the federal government. The Professional Coin Grading Service has also certified these 2015 1/2 oz Gold American Eagles as part of the First Strike series, and given them a grade of MS 70. This means each coin has a flawless finish, even under 5-times magnification.

If you have any questions during your purchasing process, feel free to contact a Silver.com associate at 888-989-7223. We’re standing by to help and are also available through our live chat function and email.