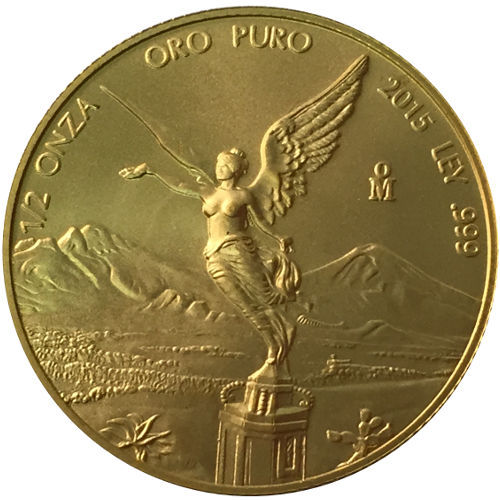 The Libertad coin is the official bullion coin of Mexico, and is produced annually in silver and gold, with a total of five weights available in each. While the silver program has three different versions, the Gold Mexican Libertad is available in a bullion and proof version only.

The Gold Mexican Libertad was first offered by the Mexican Mint in 1981 in a ¼ oz, ½ oz, and 1 oz weight. Production did not begin again until 1991, when a 1/10 oz and 1/20 oz coin were added. Consistent, annual production did not begin until 2002. Today, the ½ oz Gold Mexican Libertad is among the rarest in the series because it has low mintage numbers.

On the reverse side of the 2015 ½ oz Gold Mexican Libertad you’ll find the Mexican coat of arms. The official seal of the nation, it features an eagle locked in battle with a serpent on top of a cactus branch. The official name of the country, “Estados Unidos Mexicanos,” is engraved above, while a wreath encircles the bottom of the seal.

The obverse side features a depiction of the angel of independence. A symbol of resistance and freedom during the War of Independence, a statue of her likeness (known as Winged Victory) stands to this day in Mexico City.

Spanish conquistadors established the Mexican Mint around modern-day Mexico City in 1535, making it one of the oldest operating facilities in the world, predating both the United States Mint and the Royal Canadian Mint in North America.

At Silver.com, we welcome the opportunity to settle any questions you might have about our products. You can reach our team members one the phone at 888-989-7223, online via our live web chat, or by sending us an email. If you are looking for similar products, be sure to check out our full collection of Mexican Mint coins.