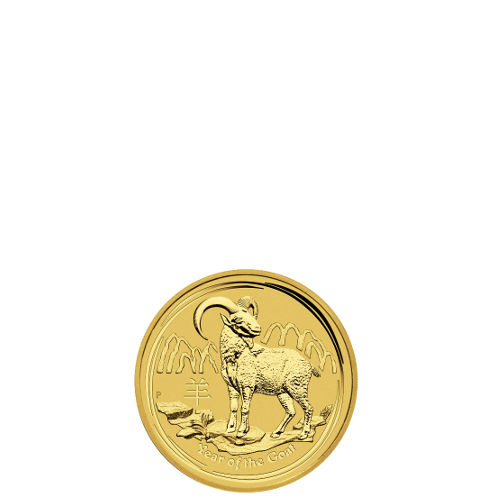 2015 marks the Year of the Goat on the Chinese lunar calendar, and to celebrate, the Perth Mint has created a brand new lineup of gold and silver bullion coins to commemorate this character of the Zodiac. The 2015 1/20 oz Gold Australian Goat coin has a different primary image than the Silver Australian Goat that the Perth Mint is producing for the Lunar Series 2 silver coins. This includes a single goat as opposed to three goats which are used on the silver coin. Each of these coins have been struck in .9999 fine gold and weigh 1/20th of a troy ounce with a $5 AUD face value.

The coin’s primary image features a lone, adult goat standing on a rocky cliff. The animal’s head is raised in a state of vigilance, while the outline of mountainous terrain is noticeable in the background. Ian Rank-Broadley is responsible for the image featured on the opposite side of the coin, an inspired portrait of a younger Queen Elizabeth II.

The 2015 1/20 oz Gold Australian Goat coin features the primary image of the goat on the reverse side of the coin. This side of the coin bears the mint mark “P,” signifying it was produced at the Perth Mint. Below the goat is the phrase “Year of the Goat.” On the robverse side, Queen Elizabeth II’s image is surrounded by the words “Elizabeth II, Australia” on the top, and the weight, purity, and face value of the coin on the bottom.

All of the coins in the Year of the Goat Lunar Series 2 are considered legal tender by the Government of Australia. The 2014 1/20 oz Gold Australian Goat coin has a legal tender value of $5 in Australia. The Perth Mint is the lone remaining facility from the Royal Mint of London’s system established by Great Britain during the 19th century. Today, you can get the 2015 1/20 oz Gold Australian Goat coin in brilliant, uncirculated condition.

All orders are shipped discreetly and insured for their full amount in the unlikely event that a package becomes lost or damaged while en route. As an additional measure, Silver.com requires all packages over $300 to be signed for upon delivery. Should you require assistance, please give us a call at 1-888-989-7223 or use the online live chat feature to get in touch. We look forward to hearing from you.