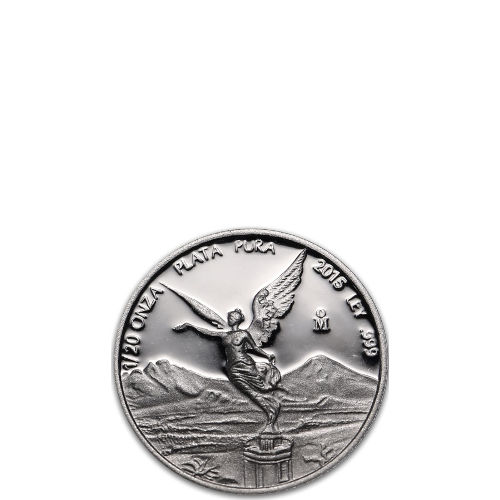 The Silver Mexican Libertad is the official bullion coin of the nation of Mexico, and despite being overshadowed in North America by the Silver American Eagle and Silver Canadian Maple Leaf, it is growing in popularity. These coins are available in both bullion and proof versions, and right now Silver.com offers the 2015 1/20 oz Proof Silver Mexican Libertad Coin for collectors.

Proof Silver Mexican Libertad coins were first introduced in 1983, but briefly halted in 1984 and 1985. Since 1986, the Mexican Mint has struck a one ounce Proof Silver Mexican Libertad coin on an annual basis, and it is often the most popular weight. Among the four fractional-weight coins, introduced in 1992, the 1/20 ounce coin is the most popular.

On the obverse face of all Proof Silver Mexican Libertad coins is the image of Winged Victory as she stands atop a marble pillar. The image is representative of the statue of Winged Victory, also known as the Angel of Independence, which stands in the center of Mexico City and was erected to honor 100 years of Mexican independence in 1920.

The reverse face of the Silver Mexican Libertad features the nation’s coat of arms. In the image, a Mexican eagle sits atop its perch on a cactus as it does battle with a serpent. The design is reflective of the nation’s struggle to free itself from the grip of Spanish colonial rule in the 1820s.

The Mexican Mint is the oldest operating facility in the Western Hemisphere. Originally founded in 1535 by Spanish conquistadors, today it is controlled by the federal government in Mexico and overseen by Banco de Mexico, the nation’s central bank.

If you have questions, don’t hesitate to ask a Silver.com associate. We’re available on the phone at 888-989-7223, online using our live web chat, and via email. If you want to view similar products, visit our Mexican Mint page. 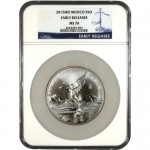