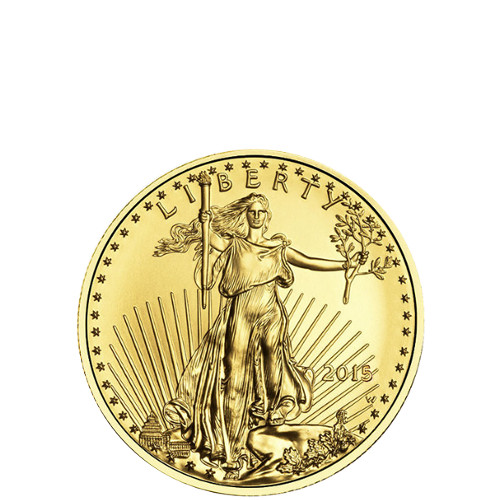 Today, you can own a 2015 1/4 oz Gold American Eagle coin from Silver.com in brilliant uncirculated condition. Every coin is struck at the United States Mint using .9167 fine gold and has been assigned a legal tender value of $10.00 USD. Even though the coins contain only 22k gold, their actual weight is .27275, giving the coins a pure gold weight of .25 or 1/4 troy ounce.

When the Founding Fathers of America selected the bald eagle as a national emblem, they saw in the creature the spirit and determination of the American people. Known for its power, majesty, and longevity, those early American leaders believed the eagle represented the fortitude that guided the nation through the Revolutionary War. More than 200 years later, the eagle stands the test of time as America’s enduring symbol of freedom and power.

As the official gold bullion coin of the United States, the Gold American Eagle stands alongside coins such as the Krugerrand, Gold Canadian Maple Leaf, and others as one of the most respected gold bullion products in the world. The Gold Bullion Coin Act of 1985 authorized the US Mint to begin production of the coins using gold sourced from within the United States.

On the obverse side of the 2015 1/4 oz Gold American Eagle, Augustus Saint-Gaudens’ full-length feature of Lady Liberty can be seen emerging from the rising sun. With a torch in her right hand and an olive branch in her left, Lady Liberty strides forward with her robe flowing in the wind. Her image is surrounded by 50 stars, representing each of the US states. Engravings include “Liberty” and the year of minting.

Sculptor Miley Busiek’s image of an eagle family in its nest is featured on the reverse side. In the image, a male eagle returns to the nest with an olive branch. A female eagle is seen guarding the hatchlings and eggs inside the nest. The image is flanked by engravings of “E Pluribus Unum” and “In God We Trust,” while the engravings “United States of America,” the weight, purity, and metal content surround the rim of the coin.

The US Mint was established by an act of Congress in 1792. Since that time it has been responsible for the production of commemorative and circulation currency for the federal government. After the Gold Bullion Coin Act of 1985 was passed, it has also been tasked with minting all bullion coins, including the Gold Eagle.

If you have any questions about the 2015 1/4 oz Gold American Eagle coin, other Silver.com products, or the purchasing process, feel free to call our associates at 888-989-7223. You can also speak with us directly through our website by using the live chat function or by sending us an email.