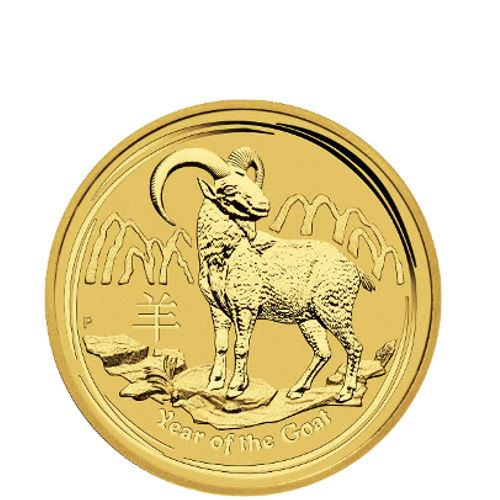 The main image on the 2015 1/4 oz Gold Australian Goat features a lone, adult goat standing on a rocky cliff ledge. Behind his figure is the outline of mountainous terrain. The goat itself stands with its head raised in vigilance, looking off into the distance. Included on this side of the coin is the Perth Mint’s mark, a simple “P.” Below the image is the phrase “Year of the Goat.”

The Perth Mint is the last remaining from the Royal Mint of London system established in the 19th century. As gold was discovered on the Australian continent, Great Britain saw a need for more facilities to process the gold into coinage and other bullion. The Perth Mint was completed in 1899, making it the third facility completed after the Sydney Mint and Melbourne Mint.

Should you require assistance or have any questions with regard to the 2015 1/4 oz Gold Australian Goat Coins, you can get in touch with a member of our customer service staff toll-free at 1-888-989-7223. Our representatives are also available online through the live chat feature or by email. Make sure to glance over our full offering of Perth Mint Lunar Series 2 Coins for more sizes and editions.