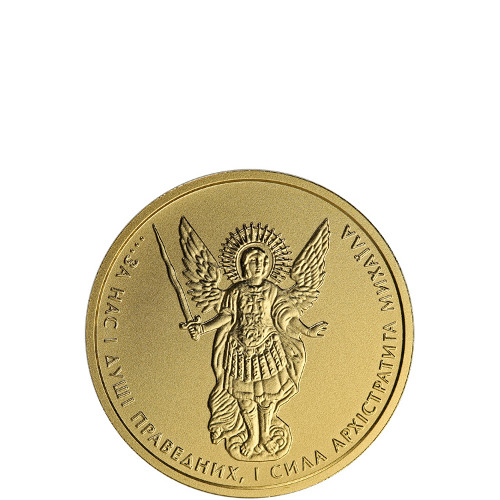 Michael is perhaps the most well-known archangel from the stories of the Christian Bible. Known by many Western religions under different names, he is mentioned three times in the Book of Daniel and in the New Testament leads the armies of God against Satan’s forces in the Book of Revelation. Today, he appears on the 2015 ¼ oz Gold Ukrainian Archangel Michael Coin, available to you online at Silver.com.

The Archangel Michael is known to both Eastern and Western Churches, as well as the Jewish faith. Though the Jewish faith has a rabbinical prohibition against people appealing to angels as intermediaries between God and his people, Michael’s popularity among people of faith was such that he came to occupy a place in Jewish liturgy.

For the people of Ukraine, Michael holds a particularly high place as the protector of the nation and the capital of Kiev. His image is often recreated in many different forms. He is at times depicted alone, or even alongside other angels such as Gabriel. In many depictions he is featured as an angelic warrior with full armor, a helmet, sword, and shield.

The 2015 ¼ oz Gold Ukrainian Archangel Michael Coins in this listing are available in BU condition. Coins in this condition have a complete absence of wear and tear. However, minor flaws are possible in the form of breaks in the luster, spotted surfaces, or contact marks from the mint’s production process.

On the reverse of the Gold Ukrainian Archangel Michael is the image of the angel who helped defeat Satan’s forces in the battle for control of heaven. This angelic depiction of the archangel shows him with a sunblast aura behind his head, a sword in his right hand, and full body armor.

The obverse of all 2015 ¼ oz Gold Ukrainian Archangel Michael coins includes the small coat of arms for Ukraine. There is a semi-circular inscription in Ukrainian that reads “National Bank of Ukraine above the design field and below an engraving of the face value, year of issue, metal fineness and coin weight.

Please contact Silver.com if you have questions regarding these gold coins. You can contact us at 888-989-7223, chat with us live online, or send us an email with your inquiries.