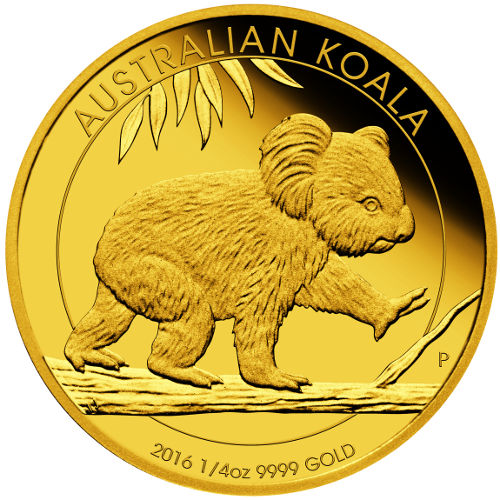 The koala is often misrepresented by some as the Koala Bear. In reality, the animal is one of three major marsupial species to inhabit Australia. The cute, cuddly koala is actually capable of defending itself when threatened, possessing very sharp claws and a short fuse. Generally speaking, they are docile creatures though who spend up to 20 hours a day sleeping.

On the reverse side of the 2016 ¼ oz Proof Gold Australian Koala coin you’ll find the latest Koala design from the Perth Mint. It features the Koala climbing along a horizontal eucalyptus tree branch. The eucalyptus is low in calories and nutritional value, contributing to the low energy levels in koalas.

The obverse of the 2016 Proof Gold Australian Koala coin features Queen Elizabeth II’s right-profile portrait from Ian Rank-Broadley. In use since 1998, it is the fourth-generation image of Her Majesty on commonwealth coinage since she ascended to the throne.

Perth Mint is Australia’s oldest operating facility, having opened its doors in 1899 as the third and final installation in the Royal Mint system. Today it is a state-owned entity of Western Australia. Though it is not associated with the Royal Australian Mint, its coins enjoy legal tender status under the Currency Act of 1965.

If you have questions, please feel free to contact us at 888-989-7223. You can also contact Silver.com online using our live chat or email features. To see similar products, check out our full selection of Australian Gold Coins.