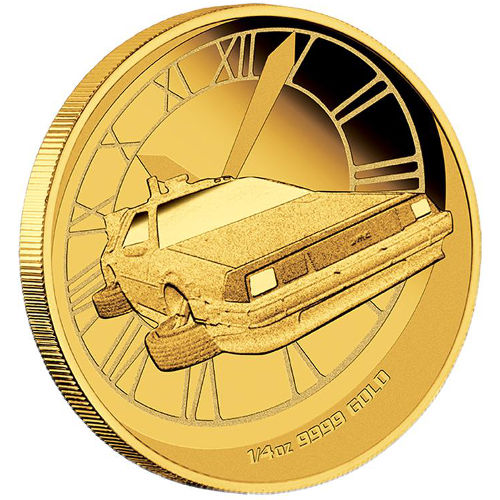 Brace yourself Back to the Future fans, but it’s been 30 years since the first film in the franchise hit American theaters. Those who fell in love with the comedic Sci-Fi series enjoyed the multiple pop culture references and view the films as timeless classics in the genre. Today, the Perth Mint celebrates 30 years of Back to the Future with a 2015 ¼ oz Back to the Future Gold Proof coin, available now on Silver.com.

The film franchise focused on the adventures of Marty McFly (Michael J. Fox) and Doc Brown (Christopher Lloyd). In the opening film, McFly accidentally travels back to 19855 in Doc Brown’s time machine, encountering his parents as teenagers and jeopardizing his own future existence.

Australia’s Perth Mint is well known for producing commemorative coins that honor pop culture icons. The Back to the Future Proof coins celebrate the most iconic images that are still remembered today by fans of the film franchise.

On the reverse side of this 2015 ¼ oz Back to the Future Gold Proof Coin is the image of the DeLorean DMC-12 time machine as it flies through a clock face. The vehicle was a real-world flop in the 1980s, but a massive hit as the time machine in the Back to the Future films. Engravings include the weight, purity, and metal content of the coin.

The obverse side features Queen Elizabeth II’s right-profile portrait as designed by Ian Rank-Broadley in 1998. Her Majesty’s effigy is included on this side along with her name, the nation of issue, year of issue, and face value of the product.

The Perth Mint is located in Perth, Western Australia, and is a state-owned entity of the local government in Western Australia. Though it is not affiliated with the federal government’s Royal Australian Mint, its coins are considered legal tender under the Currency Act of 1965.

If you have questions, please contact a Silver.com associate at 888-989-7223, chat with us online, or submit your questions via email. If you are looking for similar products, visit our Gold Perth Kangaroos page.