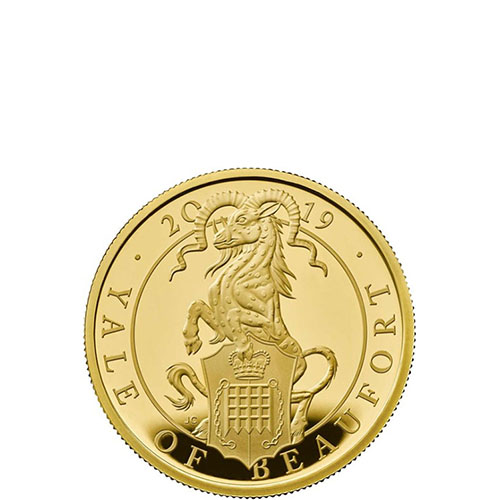 Buying gold from the Royal Mint’s Queen’s Beast Series presents investors and collectors with a variety of options. The gold coins in this collection are available in two bullion weights and four separate collectible weights. The smallest of these is the 1/4 oz gold coin. Today, 2019 1/4 oz Proof Gold British Queen’s Beast Yale of Beaufort Coins are available to you online at Silver.com.

All 2019 1/4 oz Proof Gold British Queen’s Beast Yale of Beaufort Coins in this product listing are available to purchase inside of Royal Mint of England display boxes. The coins are individually encapsulated within the box and come with a numbered Certificate of Authenticity.

On the reverse side of each 2019 Proof Gold Queen’s Beast Yale Coin is the design of the Yale of Beaufort. This image came to the Royal Arms through King Henry VII, but it was courtesy of his mother Lady Margaret Beaufort that he bore these arms. The design includes a shield supported by the Yale, a mythical beast common in European mythology.

Lady Margaret was the only heir of John Beaufort, the Duke of Somerset. She was married four times in her life, but only her second union to Edmund Tudor resulted in a son. When that son, the future King Henry VII, defeated King Richard III at the Battle of Bosworth Field the Wars of the Roses ended the Yorkist rule in England and introduced the rule of the House of Tudor.

The obverse of all 2019 1/4 oz Proof Gold Queen’s Beast Yale of Beaufort Coins features the effigy of Queen Elizabeth II. Her Majesty is depicted here in right-profile relief in the fifth-generation design created in 2015 by Jody Clark.

Please don’t hesitate to reach out to Silver.com with any questions. You can call us at 888-989-7223, chat with us live online, or simply send us an email.