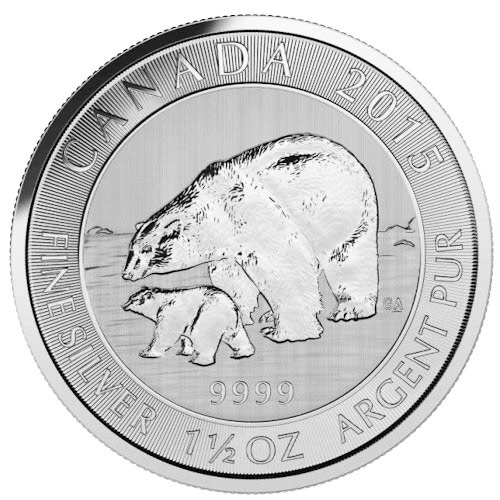 The Royal Canadian Mint has a track record of turning to nature for inspiration in coin design, and creating immensely successful bullion and proof coin programs. Fresh of the success of its Canadian Wildlife Series and Birds of Prey Series, the Royal Canadian Mint is currently producing unique 1.5 oz Canadian Wildlife coins. The 2015 1.5 oz Silver Canadian Polar Bear and Cub Coin is currently available on Silver.com.

These new coins started in 2013 with the release of the polar bear coin, which featured only a single adult polar bear in the design. For 2014, the mint chose the Arctic Fox as its representative on the coin program.

Each of the 2015 1.5 oz Silver Canadian Polar Bear and Cub coins available here is in uncirculated condition. Coins in this condition have no signs of handling or circulation use, but can showcase imperfections such as bag marks, toning, or weak design strikes.

On the reverse is the image of an adult polar bear guiding its young cub along the glaciers and ice flows of Canada’s Arctic region. These coins feature the micro-laser engraved radial lines first introduced on Silver Canadian Maple Leaf coins one year earlier.

The obverse bears the image of Queen Elizabeth II. Her Majesty’s effigy was created in 2003 by Susanna Blunt, and features the simple engravings of “Elizabeth II” above and “8 Dollars 2015” below.

If you have questions, Silver.com associates are available to help answer them. You can reach us on the phone at 888-989-7223, connect with us online through our live chat feature, or contact us via email.