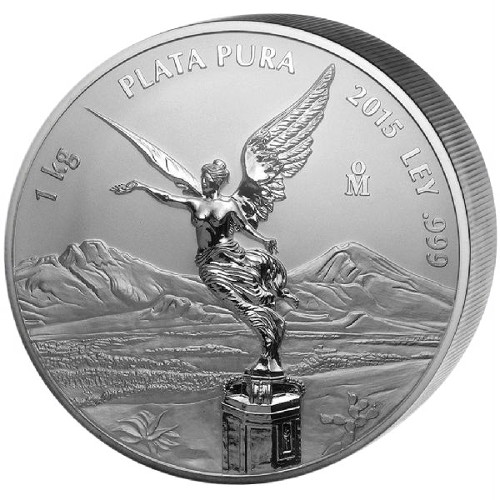 Silver Mexican Libertad coins feature an image of Winged Victory on the obverse. Although depicted based upon the Mexican Independence Victory Column erected in 1920, her image came about during the war of independence with Spain in the 1820s. The wreath she holds in her right hand reflects self-government, while the broken chains in her left signify freedom from Spanish rule.

Proof Silver Mexican Libertad coins were originally introduced in 1983, one year after the bullion version. The proof coins struggled to gain traction, as the Mexican Mint did not strike them in 1984 or 1985. The 1 oz coins returned in 1986, with the program expanding to include four fractional weights in 1992, and adding this 5 oz variant in 1996. The 1 Kilo coins debuted in 2002 with extremely low mintage figures of their own.

The obverse side 2015 1 Kilo Proof Silver Mexican Libertad coins include the images of two iconic Mexican symbols. In the background are the volcanic peaks of Popocatepetl and Iztaccihuatl, named after a pair of ancient Aztec lovers. In the foreground is the Angel of Independence as featured on the Winged Victory statue in Mexico City.

The Mexican Mint is the oldest operating facility in the Western Hemisphere. Originally opened in 1535, it once struck coins for all Spanish territories and colonies in the Western world. Today is the nation’s official sovereign mint.

We encourage all Silver.com customers to contact us with questions. Our customer service department is available at 888-989-7223, or you can connect with us online through our live chat and email options.