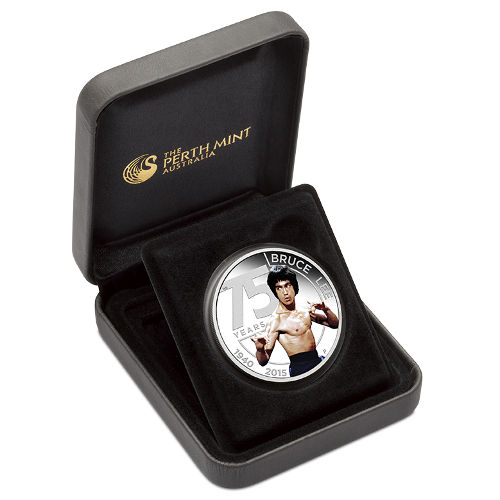 Long before Jackie Chan and Chow Yun-Fat brought martial arts to the big screen for modern generations, Bruce Lee popularized the combat form in American cinema. Lee was many things in his day, among them an actor and philosopher, but was lost to the world too soon. The Perth Mint remembers him with a special 2015 1 oz Silver 75th Anniversary of Bruce Lee Proof Coin, available today from Silver.com.

Bruce Lee broke into acting as a child star in some of his father’s productions in Hong Kong. However, he is remembered by most for his appearances in Western films, which helped popularize martial arts films in the United States, and brought legitimacy to American films overseas.

Lee was just 32 years old when he died from brain swelling. He had many popular films in theaters and was in the process of collaborating on a new film when he laid down to take a nap. He had been complaining of headaches, and never awoke from the nap.

On the reverse side of the coin is the image of Bruce Lee as most remember him, in his martial arts uniform and performing an amazing aerial maneuver. Engravings on this side include his name, the phrase “75th Anniversary,” and the years “1940-2015.”

The obverse side of the coin features the right-profile portrait of Queen Elizabeth II. Commonly used on coins produced in England, Australia, and New Zealand, this particular depiction was created by Ian Rank-Broadley.

Founded in 1899, the Perth Mint is Australia’s oldest operating facility in use today. It was originally the third and final mint in the Royal Mint system, together with the Melbourne and Sydney facilities, but is now a state-owned entity of Western Australia. Although it is not associated with the Royal Australian Mint, all of its coins are considered legal tender under Australia’s Coinage Act of 1965.

If you have questions, a Silver.com associate will be happy to answer them. Feel free to contact us at 888-989-7223, chat with us online, or send us your questions in an email. If you are interested in similar products, be sure to check out our full selection of Perth Mint products. 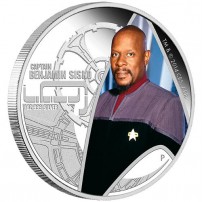