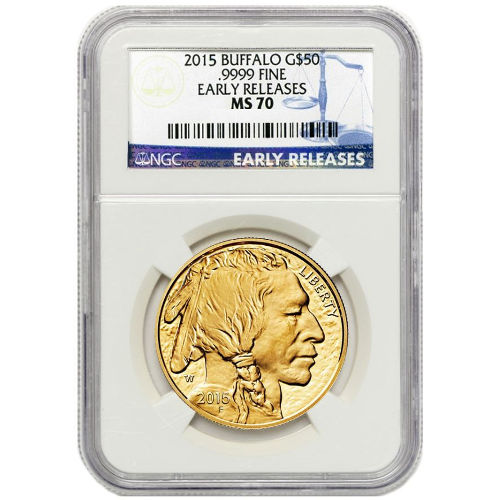 For centuries, the buffalo roamed the open grasslands and rolling prairies of the American West. Native American tribes followed the buffalo across the Plains, using the animal as a source of food, shelter, and clothing. European settlers moving across the continent also relied upon the buffalo for the same purposes. Today, you can own the 2015 1 oz Gold American Buffalo Coin with an MS70 grade from the Numismatic Guaranty Corporation. These coins are available from Silver.com as part of the early release series, meaning they were received by the NGC within the first 30 days of their release.

The Gold Buffalo is one of the most popular bullion coins from the US Mint. Classic designs are used on this coin that have been in existence for more than 100 years. The buffalo image on the coin depicts Black Diamond, a massive buffalo that resided at the Central Park Zoo in New York City in the early 20th century. On the opposite side, James Earle Fraser’s depiction of an American Indian chieftain is featured, as once used on the 1913 Buffalo Nickel. The 1 oz Gold American Buffalo was introduced in 2006 and was the first ever 24k, 99.99% pure gold coin to be produced by the US Mint.

On the reverse side of the coin is the depiction of Black Diamond. The massive, intricately detailed buffalo is surrounded by the engravings “United States of America,” “E Pluribus Unum,” and “In God We Trust.” Additional engravings include the face value, weight, purity, and metal content. The obverse side of the coin displays Fraser’s right-profile portrait of an American Indian. The engravings on this side are simple, and include “Liberty” and the year of minting.

Silver.com is dedicated to providing the best possible customer service. If you have any questions about the 2015 1 oz Gold American Buffalo Coin with NGC MS70 grade, our associates are available at 888-989-7223. You can also reach out to us during business hours online using our live web chat function.