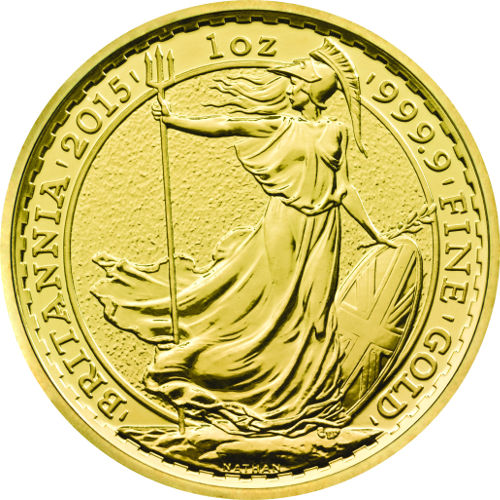 The 2015 1 oz Gold British Britannia Coin features 1 troy ounce of .9999 pure gold. These coins are minted by the Royal Mint and have a face value denomination of 100 Pounds. Available via Silver.com in BU (Brilliant Uncirculated) condition, each 2015 coin features the same stunning design as the past several years.

The Britannia coin is one of the most recognizable bullion products in the world today. The Roman Empire first issued a coin featuring the Britannia image during its conquest of the British Isles in the first century A.D. Originally, the term “Britannia” was used to refer to the nation of Britain. Using names to personify a nation was commonplace during Roman rule. Beginning in the second century A.D., Britannia became associated with a goddess of the seas who protected the British Isles from invasion. Today, the 1 oz Gold Britannia coin is one of the strongest performers in the modern precious-metals market.

The image of Britannia is considered to represent the protector of Britain. The English Channel has long served as a strong physical barrier to invasion, and Britannia was the personification of that barrier. The reverse side of all 2015 Gold Britannia coins features the iconic image of Queen Elizabeth II used on numerous Royal Mint bullion products.

On the obverse side of the coin, the image of Britannia is featured standing in the waters of the English Channel. She holds a shield emblazoned with the Union Jack in her left hand, while wielding a trident in her right hand. Her image is surrounded by engravings including “Britannia,” the year of minting (2015), and the weight, purity, and metal content of the coin.

The Royal Mint has produced coins for the monarchy and government of the United Kingdom for more than one thousand years now. Today, the mint produces military medals and commemorative bullion products in addition to official currency for the government of Britain. Should you wish to find out more about the 2015 1 oz Gold British Britannia Coin before ordering, please call Silver.com at 1-888-989-7223. You can also reach us through the website’s live chat feature or by email.