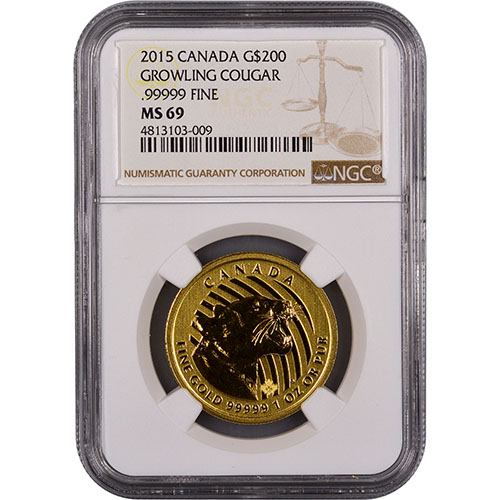 The Royal Canadian Mint is famed for the production of gold and silver coins which feature many of the native wildlife that roams its vast wilderness landscape. Among the top predators in the Canadian wild is the cougar, and it is the second creature to arrive in the Call of the Wild Series. The 2015 1 oz Gold Canadian Growling Cougar Coin is now available to you for purchase online at Silver.com with an NGC certification!

One of the largest wild cats in the world, the cougar is second largest in the Western Hemisphere behind only its cousin the jaguar. Cougars are known by many names through North and South America, ranging from mountain lion and puma to panther and catamount. Whatever you call this creature, do not call it timid.

The cougar is an adept killer who hunts by ambush, silently stalking its prey and pouncing before the target even realizes the cat is in the area. Cougars are typically apex predators in their environment but do yield to large predators in the North American wilderness such as the gray wolf, American black bear, and grizzly bear.

In the Call of the Wild Series, the Royal Canadian Mint issues gold coins with stunning .99999 fine gold content. Each coin has a shared element in the reverse design field known as its “Call of the Wild” lines. These lines mimic the sound waves that carry each animal’s powerful call out into the wilderness.

On the reverse of the Gold Canadian Growling Cougar Coin is the depiction of a cougar. The animal’s head and neck are captured with the jaws open exposing its sharp teeth as it releases its call. Engravings include “Canada” and “Fine Gold 99999 1 oz Or Pur.”

The obverse of the 2015 1 oz Gold Canadian Growling Cougar Coin bears a right-profile portrait of Queen Elizabeth II. Her Majesty is found here in a fourth-generation design. Created by Susanna Blunt in 2003, this is just the second effigy of the Queen for Canadian coins created by a Canadian artist.

All 2015 1 oz Gold Canadian Growling Cougar Coins are available here in Mint State 69 condition. Known as a near-perfect coin, it has full, original mint luster with a maximum of two minor detracting flaws such as minuscule contact marks or hairlines.