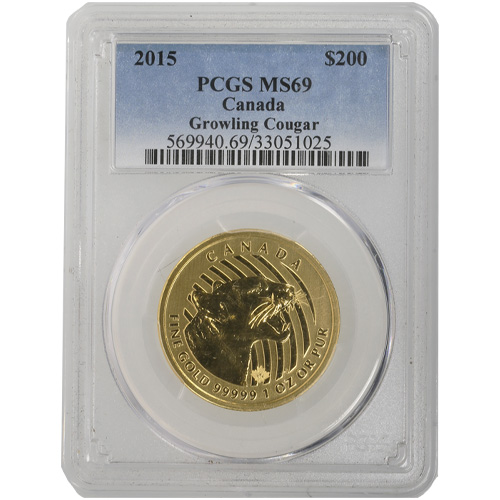 The Call of the Wild Series was introduced by the Royal Canadian Mint in 2014. This impressive collection of coins features new reverse designs each year representing a native species to the Canadian wilderness and radiating lines in the reverse imagery that reflect a “wild call.” Even more unique, the coins in this series have .99999 fine gold content. Now, 2015 1 oz Gold Canadian Growling Cougar Coins are available to you to purchase online at Silver.com in near-perfect condition.

The second design in the Call of the Wild Series is that of a cougar. The cougar is the largest cat in North America and the second-largest cat in the Western Hemisphere behind the jaguar. Its range stretches all the way from the Yukon Territory in Canada to the Andes Mountains in South America. The cats are known by various names throughout the Western Hemisphere and the monikers include the catamount, puma, mountain lion, and panther.

On the obverse side of the 2015 1 oz Gold Canadian Growling Cougar Coin is the image of Queen Elizabeth II. This is the fourth-generation effigy of Her Majesty to feature on Canadian coins and was designed in 2003 by Susanna Blunt, who was just the second woman and Canadian artist to develop the monarch’s portrait for the Royal Canadian Mint.

The reverse face of 2015 Gold Canadian Growling Cougar Coins features a mountain lion’s head. With its mouth wide open to reveal its sharp teeth, the cougar lets out its impressive growl. The cougar is an ambush predator that stalks its prey and leaps onto its prey before it knows what is going on. This side of the coins includes the recently introduced maple leaf privy mark that is micro-laser engraved onto the surface as a security feature. This element debuted in 2014 on Canadian coins.

These 2015 1 oz Gold Canadian Growling Cougar Coins are available to you in near-perfect condition. The PCGS issues a Mint State 69 certification to coins that have full, original mint luster and a maximum of two minor detracting flaws. Those flaws are limited in nature to minuscule contact marks or hairlines.

The Royal Canadian Mint was founded in 1908 to refine gold and silver discovered in the Yukon Territories in the late 19th century. The RCM consists of a facility in Ottawa and a newer location in Winnipeg.

We encourage you to reach out to Silver.com with questions about gold for sale at 888-989-7223. You can also reach out to us online through our live chat and email address.