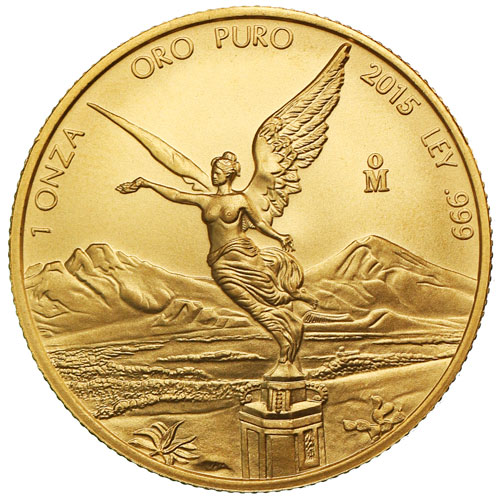 Gold Mexican Libertad coins were first introduced in 1981, but their design dates back to the 1921 release of the Centenario coin. The Mexican Mint introduced the Centenario in 1921 to commemorate 100 years of independence from Spain. The coins had a face value of 50 Pesos, and featured iconic images from Mexico’s battle for freedom and its Aztec history.

Centenario coins were produced from 1921 to 1947, with coins struck from 1949 to 1972 bearing 1947 mintage dates. Gold Mexican Libertads started in 1981 in ¼ oz, ½ oz, and 1 oz weights. Production ceased until 1991, when a four-year production run included the 1 oz coin and four fractional-weight coins. After another hiatus until 2000, and a one-year hiatus in 2001, the Mexican Mint released Gold Mexican Libertads annually starting in 2002.

Today, the obverse face of all Gold Mexican Libertad coins bears an updated version of Winged Victory. Her likeness has shrunk and shifted to a left-profile view from the previous front-facing view. Engravings include the weight, metal content, year of minting, and purity of the coin.

On the obverse is the coat of arms for Mexico. In the center, a Mexican eagle battles a serpent in its claws and beak atop its perch on a cactus. “Estados Unidos Mexicanos” is engraved above, and the image is surrounded by a collection of 10 historic versions of the coat of arms that date back as far as 1820.

Each 2015 1 oz Gold Mexican Libertad coin available from Silver.com is in Brilliant Uncirculated condition. A BU coin shows no signs of wear and tear, but it may have breaks in the luster, spotted surfaces, or contact marks from the minting process.

If you have questions, please reach out to Silver.com at 888-989-7223, or chat with us online. You can also email your questions to an associate. If you are looking for similar products, go to our Mexican Mint page.