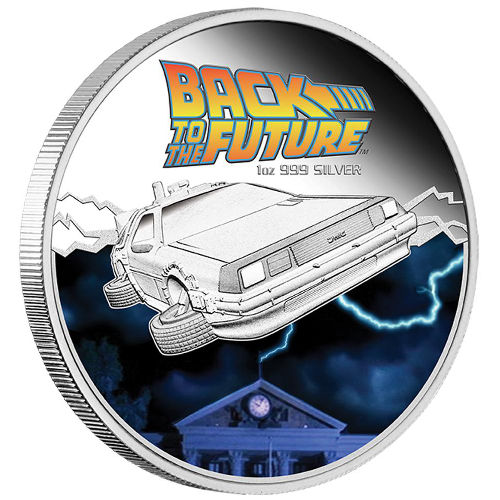 2015 1 oz Proof Silver Back to the Future Coins

It’s hard for some children of the 1980s to believe it, but the Back to the Future film franchise is celebrating 30 years in 2015. In honor of the comedy Sci-Fi classic’s 30th anniversary, the Perth Mint released a series of commemorative coins to celebrate the occasion. Silver.com currently offers the 2015 1 oz Back to the Future Silver Proof coin for collectors to purchase.

One of the lasting images from all three Back to the Future films was the DeLorean DMC-12. Based upon the short-lived, real-world car, Christopher Lloyd’s character (Doc Brown) turned a DeLorean into a time machine that used a flux capacitor to take himself and Marty McFly (Michael J. Fox) forward into the future and back to the past.

On the reverse face of this 2015 1 oz Back to the Future Silver Proof coin you’ll find a combination of silver finish and brilliant colorization. Along the top is the engraving of the Back to the Future logo from the films, complete with yellow fill and blue outlines. The DeLorean flies through the middle, as depicted at the end of the first film, while the Hill Valley clock tower is struck by lightning below, complete with natural tones.

The obverse of the coin bears the right-profile portrait of Queen Elizabeth II. Her Majesty’s effigy is surrounded by engravings that include “Queen Elizabeth II,” “2015,” “Tuvalu,” and “1 Dollar.”

Australia’s Perth Mint hit new heights with this coin, offering an entirely unique presentation case. Each of these coins arrives with its own DeLorean DMC-12 display case. As you open the hood of the vehicle, you’ll find the perfect resting place for your proof coin.

You can contact Silver.com at 888-989-7223 with questions. We’re also available online using our live chat and email services. If you are interested in similar coins, be sure to check out our selection of Silver British Coins.