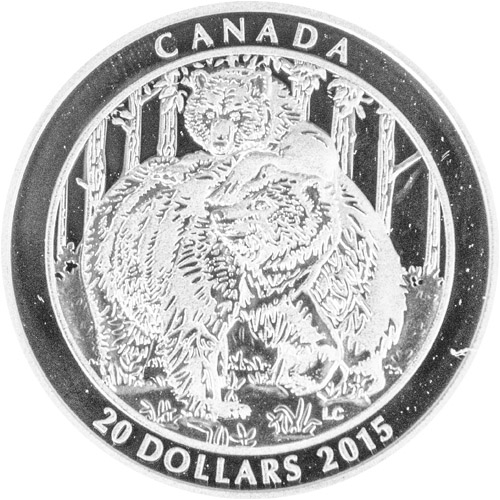 Take a special trip to the landscape of Canada with this Proof coin release from the Royal Canadian Mint! This 2015 coin is a true masterpiece, featuring both wonderful scenery of the Canadian wilderness, as well as the special bond between two grizzly bears during their mating season. This coin offers an extra design touch with its visual colorization, which is something that coin collectors and investors around the world will love. Currently, the 2015 1 oz Proof Silver Colorized Canadian $20 Grizzly Bear Togetherness Coin Box COA can be purchased online from Silver.com.

The 2015 1 oz Proof Silver Colorized Canadian $20 Grizzly Bear Togetherness Coin was struck in 99.99% pure silver and holds a face value that’s fully backed by the Canadian government. This coin has an exclusive colorized finish, allowing the reverse design on the coin to truly stand out. When ordering from Silver.com, you will receive this 2015 release with a Certificate of Authenticity and packaged in a decorative presentation box.

The Royal Canadian Mint’s Grizzly Bear Coin collection features four different silver coins, each with its own special design. The designs seen in this series are made to highlight the life of grizzly bears living in the wilderness of Canada. The collection as a whole gives the viewer multiple insights into the activities of bears. This specific release for 2015 shows grizzly bears during their mating season, where a male bear pursues a female.

On the reverse of the 2015 1 oz Proof Silver Colorized Canadian $20 Grizzly Bear Togetherness Coin is two grizzly bears forming a bond during their mating season. The female stands on her hind legs while the male is on all fours. They are both pictured among the wilderness of Canada, as the viewer can see the forest in the background.

Our team at Silver.com is here to help if you have any questions when buying silver. We are available via email, online live chat, or by phone at 888-989-7223.