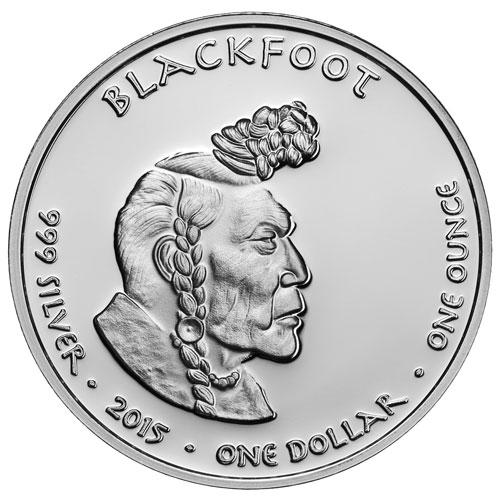 The Native American Mint’s fourth release in the Native Dollars Series is the first to feature a design inspired by a real-world member of the tribal nation represented on a coin released in the series. The Blackfoot Confederacy of North America is represented on the Idaho coin by the image of Bear Bull, a famous warrior from the tribe. Today, the 2015 1 oz Silver Proof Idaho Blackfoot Porcupine Coin is available to purchase on Silver.com.

Members of the modern Blackfoot tribe number some 32,000 people in total spread across three Canadian provinces and two US states. Known as the Blackfoot Confederacy, members of this tribe come from the Siksika, Kainai, Northern Piegan, and the Souther Piegan. The former three tribes reside in Canada’s Saskatchewan, Alberta, and British Columbia provinces, while the latter tribe resides largely in Montana and parts of Wyoming.

Historically speaking, the Blackfoot peoples roamed the Great Plains of Western North America from southern Canada across the Dakotas, Montana, Wyoming, and Idaho in the United States. The Blackfoot were known as nomadic bison hunters and trout fisherman, often following the movements of the bison for subsistence.

On the obverse of these 2015 1 oz Silver Proof Idaho Blackfoot Porcupine Coins is the right-profile portrait of Bear Bull. He was a well-known warrior in the Blackfoot tribe who was also famous for his medicinal pouches he carried. His image is surrounded by the tribal name, and the coin’s purity, metal content, year of issue, face value, and weight.

The reverse features only the image of a porcupine, along with standard engravings on the reverse of coins in the series. The satin finish of these 2015 1 oz. Silver Proof Idaho Blackfoot Porcupine coins gives them a mirror-like appearance.

If you have questions about Native American Mint coins, please contact Silver.com at 888-989-7223, chat with us online, or email us.