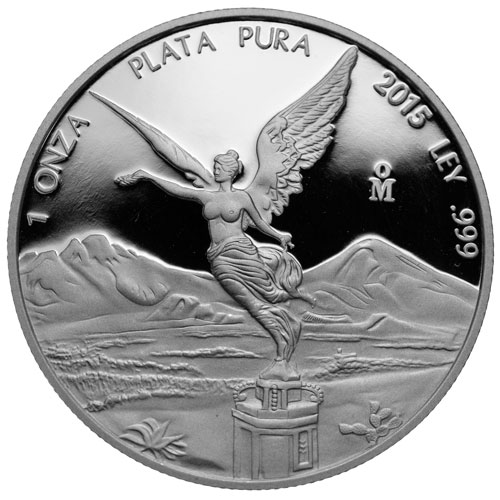 There are a wide variety of silver sovereign coins for investors and collectors to choose from today. Among the increasingly popular products is the Silver Mexican Libertad. The official silver sovereign of Mexico, this coin is available in bullion, proof, and proof-like finishes. In this product listing, Silver.com offers the 2015 1 oz Proof Silver Mexican Libertad Coin for purchase.

The program entered regular production in 1986 with just this one ounce coin available. Beginning in 1992, the program underwent two expansions that added a total of seven weights for investors and collectors. That year, four fractional-weight coins were added to the lineup, with a 2 oz and 5 oz coin added in 1996.

On the obverse side of the Proof Silver Mexican Libertad is the image of Winged Victory. As Mexico began celebrating 100 years of freedom from Spanish rule in 1920, a statue of the Angel of Independence was erected in the center of Mexico City. Her image was first used on the Centenario, and now features prominently on the Libertad.

The Mexican Mint was first founded in 1535 by Spanish conquistadors. For centuries, the Mexican Mint produced gold and silver products that were shipped back to Spain, leaving Central American shores forever. Today, the Mexican government governs the mint, with oversight from the Banco de Mexico.

Silver.com encourages all customers to ask questions about our products when they arise. You can reach us on the phone at 888-989-7223, online using our live web chat, and via email. If you are looking for similar coins, check out our Mexican Mint page.